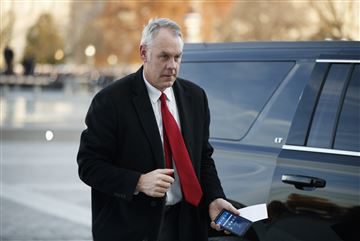 Credit: Shawn Thew/Getty Images.
Secretary of the Interior Ryan Zinke arrives at the US Capitol on 3 December.

Interior Secretary Ryan Zinke will depart the administration amid growing controversy over allegations that he violated ethics rules, President Trump announced on 15 December.

Trump tweeted that Zinke "will be leaving the Administration at the end of the year after having served for a period of almost 2 years."

"Ryan has accomplished much during his tenure and I want to thank him for his service to our Nation," Trump wrote.

He did not specify whether Zinke resigned or was fired, and said he will announce a new secretary next week. Whoever Trump nominates will likely have to go through Senate confirmation.

Zinke took to Twitter to blame "false allegations" as a factor in his exit from the administration.

"I love working for the President and am incredibly proud of all the good work we’ve accomplished together," he wrote. "However, after 30 years of public service, I cannot justify spending thousands of dollars defending myself and my family against false allegations."

David Bernhardt, the deputy Interior secretary, could take over as acting secretary in the interim.

Bernhardt has been the point person on numerous major Interior initiatives, such as changes to the Endangered Species Act and efforts to start drilling for oil in the Arctic National Wildlife Refuge. He is widely expected to continue similar policies as Zinke, though perhaps with a different tone.