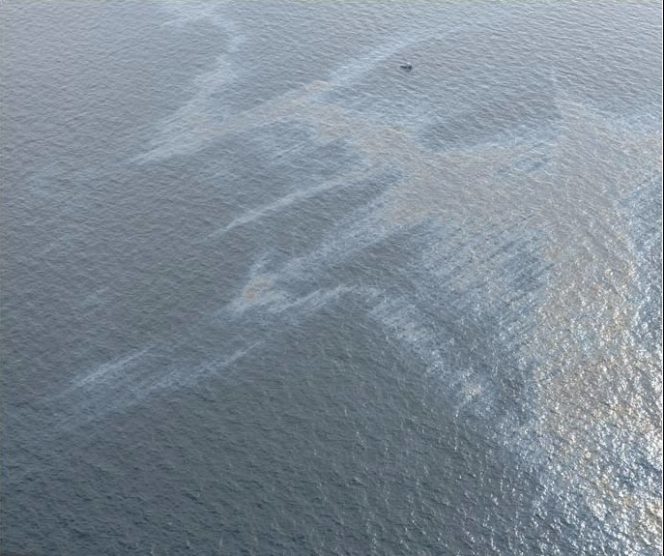 Credit: US Coast Guard
An oil slick floats at the Taylor MC20 site.

The Coast Guard has partially assumed federal control of response operations to contain an oil discharge from the site of the collapsed Mississippi Canyon Block 20 (MC20) offshore platform 11 miles south of the mouth of the Mississippi River. Under the Federal Water Pollution Control Act, the Coast Guard will access the Oil Spill Liability Trust Fund and assume authority for containing and disposing the oil.

In November, the Coast Guard contracted a specialized team to conduct a comprehensive site survey, fabricate a containment system, and install it at the source to start collecting the oil. At present, the team is in the planning phase. Weather and sea state largely will dictate operations, which will involve cumulative weeks at sea, extensive dive and remotely operated vehicle operations, and underwater equipment installation.

“While the safety of response personnel is paramount, we don’t want to delay response activities,” said US Coast Guard Capt. Kristi Luttrell, the Federal On-Scene Coordinator (FOSC) for the MC20 response. “We plan to leverage every weather window available from now until the system is installed and collecting oil,” she said.

The MC20 platform, owned by Taylor Energy, toppled in September 2004 during Hurricane Ivan after storm surge triggered an underwater mudslide. The platform's well conductor pipes were left buried in more than 100 ft of mud and sediment. Since the initial incident, federal officials have directed Taylor Energy to remove the platform deck, remove subsea debris, decommission the oil pipeline, attempt to contain the leaking oil, and plug nine of the 25 affected wells that were deemed highest risk. Following multiple scientific studies, conducted over several years by federal and industrial experts, the FOSC issued an administrative order in October requiring Taylor Energy to propose a final viable plan to install a containment system. In November, the FOSC ultimately issued Taylor Energy a Notice of Federal Assumption, and assumed authority for containing the oil.

“We are committed to public safety and preserving the Gulf marine environment,” Luttrell said. “As we move swiftly to develop and install the containment system, we will continue working with our federal, state, and local partners to ensure a permanent solution is in place,” she said.