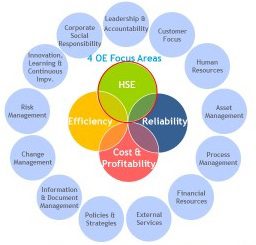 Saudi Aramco’s Southern Area Oil Operations (SAOO) organization is one of the company’s critical areas of operations. It contains some of the largest oil-production and -processing facilities in the world. SAOO embarked some time ago on a journey of sustainability by setting an ambitious plan to reduce consumption of resources and minimize impact on the environment, all while sustaining capability and readiness to meet current and future demands. This paper sheds light on SAOO’s continuing journey of sustainability and discusses implemented and planned activities that make sure the journey continues.

Introduction
SAOO is one of the administrative areas under Saudi Aramco’s upstream business line. SAOO is made up of 11 departments that operate over a large area that extends 350 km east to west and 650 km north to south. SAOO’s area is slightly larger than the US state of Minnesota. SAOO contains Ghawar Field, which is the world’s largest oil field. SAOO operatesand maintains multiple gas/oil-separation plants; Khurais, largest oil project increment ever undertaken, which included the Khurais Central Processing Facility, a grassroots crude-processing and -stabilization facility; as well Abqaiq Plants, the largest oil-processing facility in the world. Additionally, several nonassociated-gas-gathering manifolds are operated and maintained by SAOO. The largest seawater-treatment plant in the world is in Qurayyah, along with multiple pump stations and several water-injection facilities. SAOO facilities are interconnected by more than 10 000 km of pipeline, which connects these facilities to the rest of the company.

SAOO is part of Saudi Aramco, Saudi Arabia’s national oil company. Saudi Aramco operates with full compliance and regard to the Saudi Arabian government’s two major environmental regulatory agencies: the Royal Commission of Jubail and Yanbu Environmental Rules and Regulations and the Presidency of Meteorology and Environment.

In fact, similar to the rest of Saudi Aramco, SAOO has been in compliance with the company’s first environmental protection policy, which was established in 1963 to ensure that all operations do not create undue risks to the public health or environment. Additionally, the policy makes certain that operations are conducted in the company with full regard for the protection of the air, water, and land from harmful pollution.

In addition to the company’s environmental protection policy, Saudi Aramco has enacted a number of engineering standards, procedures, and industry best practices to help Saudi Aramco manage and mitigate environmental issues that result from its activities, products, and services.

SAOO complies with and follows rules laid down by Saudi Arabia’s regulatory agencies, as well as Saudi Aramco’s environmental standards and procedures, and uses industry’s best practices. As a result, SAOO’s sustained environmental performance lead its organizations to win an unmatched 11 Saudi Aramco President Awards for Environmental Stewardship. Similar to Saudi Aramco, SAOO is aware that changes are constantly taking place and future challenges are to be prepared for and addressed.

Early on, SAOO identified the need for its operations, maintenance, and engineering teams to focus on the Operational Excellence model (Fig. 1), to capitalize on all the good practices and systems that exist and make sure that SAOO sustains its progress. Hence, starting SAOO on a journey of sustainability and not a journey to sustainability.

For Saudi Aramco, and SAOO, to link its current performance and move into the future, the company selected the Operational Excellence model, which is designed to structure the way to achieve and sustain leading performance while maintaining to the highest standards of environmental stewardship, health, and safety, in a profitable and cost-effective manner.

With the company’s Operational Excellence Model, the concept of health, safety, and environment plays a major role in determining success and is among the four focus areas where the company aims to reach and maintain leading performance.