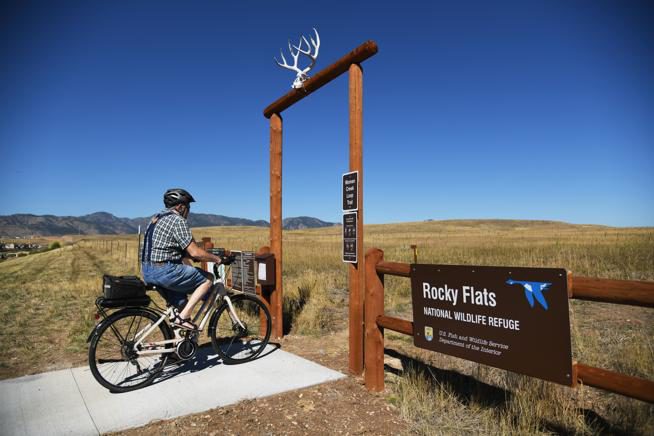 Credit: Hyoung Chang/The Denver Post.
Bob Genhauf, 71, of Arvada, Colorado, starts biking at Rocky Flats National Wildlife Refuge on 15 September. Superior, Colorado, on 14 January approved a 6-month drilling moratorium. The town is formulating its oil and gas approach in the wake of a proposal last year to drill up to 31 wells on a small undeveloped portion of land in Superior that would have extended beneath the refuge.

Superior, Colorado, trustees on 14 January approved a 6-month drilling moratorium ahead of plans to explore the town's oil and gas regulatory options.

The vote comes on the heels of last fall's ill-fated Rocky Flats National Wildlife Refuge hydraulic-fracturing application, one that would have allowed for up to 31 wells on a small undeveloped portion of Superior that would have extended beneath the refuge.

The moratorium was unanimously approved with a slate of consent agenda items—a bundle of resolutions typically reserved for bulk approval without discussion.

The site highlighted by the town's recent fracturing scare—which is owned by CenturyLink—is potentially vulnerable to future applications, officials say, who have suggested in the lead up to the vote that necessary preemptive actions should come before another company turns its eye toward the property.

It's unclear what specifically will go into the town's new oil and gas approach moving forward, though officials have hinted in recent weeks at several directions.

Among them is a turn toward home rule, which, simply defined, gives cities and towns leverage to localize legislation while limiting state intervention.

Leaders appear split on the option, and its effectiveness in matters of oil and gas is often up for debate. In the case of a dispute, higher courts determine whether an issue constitutes "local concern," and certain state laws often prevail.