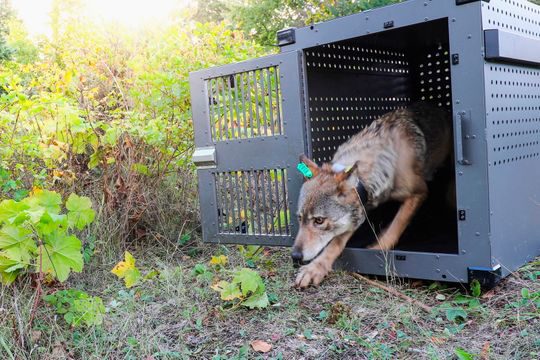 Credit: National Park Service.
A 4-year-old female gray wolf emerges from her cage as she is released at Isle Royale National Park in Michigan in September 2018.

Those are among the animals at the center of a debate over President Donald Trump's endangered species policies.

Environmental advocates say some of America's most iconic species are getting squeezed under policies intended to boost American energy dominance. They are lashing out at efforts by the administration over the past 2 years to ease species protections, open up habitats for energy development, cut conservation programs, and roll back environmental regulations.

Trump administration officials counter that they are taking reasonable steps to protect wildlife even while opening up public lands to more drilling and mining.

The administration also says it is returning more authority to states, stressing that tribal and local officials are better positioned than federal bureaucrats to strike a proper balance between conservation and the interests of local communities.

But even Trump's signature campaign promise—the expansion of a wall on the southern border—is coming under criticism from environmentalists who say such a barrier would disrupt migratory patterns.

"The safety net for wildlife in this country, which had been the federal government, has been almost completely unraveled," said Bob Dreher, who served as associate director of the US Fish and Wildlife Service in the Obama administration.

The Trump administration contends that expanded drilling and mining not only boosts local economies but also provides national security by lessening US dependence on foreign countries whose governments may be hostile or unstable.

Trump's push contrasts starkly with that of Obama, who made wildlife protection a key priority, said Ann D. Navaro, a former Interior Department attorney who worked for both administrations.