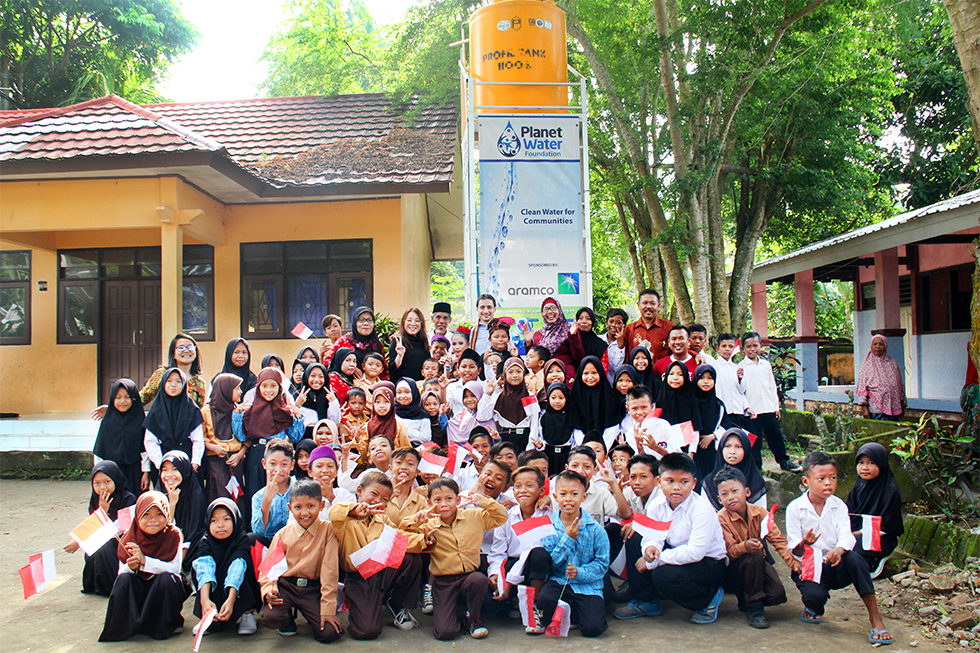 Planet Water Foundation, a nonprofit organization that addresses global water poverty in 13 countries, and Aramco Asia Singapore, an affiliate of Saudi Aramco, have completed 10 AquaTower filtration projects in Cilacap and Lombok, Indonesia. The two organizations are committed to helping the already water-stressed island nation of Indonesia after a series of earthquakes that crippled Lombok in July and August of 2018.

Thousands of affected residents were forced from their uninhabitable homes and fled to displacement camps that lacked adequate supplies of potable water. In response to the critical need for safe drinking water, Planet Water Foundation, through the financial grant provided by Aramco in 2018, rapidly deployed five AquaTower systems to serve the displaced residents of Lombok. As a result, more than 5,000 people now have a reliable source of drinking water and 2,500 children benefit from the water-health and hygiene education programs that Planet Water provides to the primary education schools where AquaTowers are located.

The remaining five AquaTowers were installed earlier in Cilacap, Indonesia, bringing the total number of beneficiaries in Lombok and Cilacap to more than 10,000 people. Aramco Asia Singapore strives to have an effect on the communities where they operate or do business by focusing on the two corporate social responsibility pillars of people and planet.

“Planet Water Foundation is positioned to respond to the critical need for drinking water in Lombok in the aftermath of the earthquakes, and we moved without hesitation to empower them with the necessary resources in providing safe drinking water for the affected Lombok villagers, as timely aid is key in disaster recovery efforts,” said Nader Al-Arfaj, managing director of Aramco Asia Singapore. “At the same time, we are very pleased to partner with Planet Water Foundation in this meaningful way by meeting the communities’ essential need for clean drinking water and hygiene education, which ultimately lifts entire communities in Indonesia.”

To mark the completion of the 10 projects, Planet Water and Aramco dedicated one of the AquaTowers deployed in Lombok with a closing ceremony on 4 April. Executives from both organizations joined with governmental and education officials in Lombok to commemorate the successful completion of these projects.

“Given the incomprehensible series of natural disasters the people of Indonesia have faced this year, it is remarkable how they have endured. Corporate citizenship is revealed in times of need, and we are extremely grateful that Aramco responded to the call for engagement without hesitation,” said Mark Steele, Planet Water Foundation founder and chief executive officer.