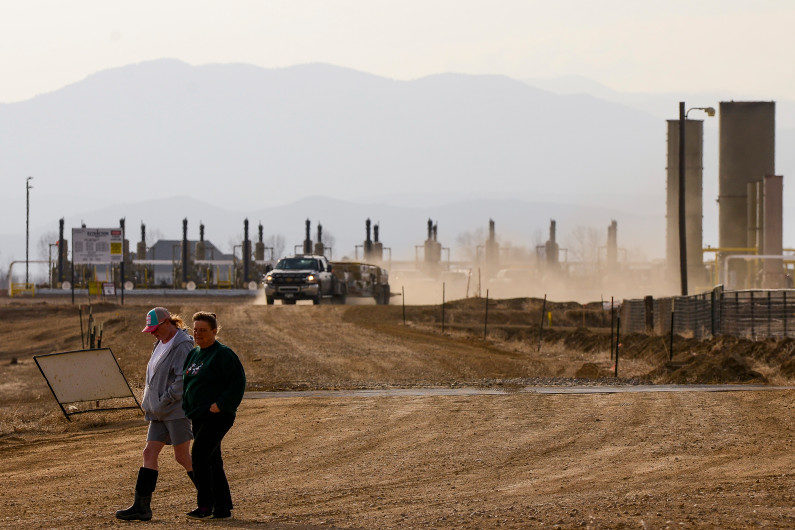 Credit: Michael Ciaglo/Special to The Denver Post.
Stephanie Nilsen, left, and her partner Janis Butterfield walk down the road next to their small ranch—and in front of Extraction Oil and Gas’ Trott pad—on 28 March 2019 in Berthoud, Colorado. Butterfield and Nilsen live about 1,000 ft south of the oil and gas site, which they say emitted harmful pollution last year. The site is one of nearly 200 in Colorado that was allowed to pollute without a federally required permit limiting emissions for its first 90 days.

Colorado public health officials have let oil and gas companies begin drilling and fracturing for fossil fuels at nearly 200 industrial sites across the state without first obtaining federally required permits that limit how much toxic pollution they can spew into the air.

Air pollution control officials at the Colorado Department of Public Health and Environment allow the industry to emit hundreds of tons of volatile organic chemicals, cancer-causing benzene, and other pollutants using an exemption tucked into the state’s voluminous rules for the industry—rules that former Gov. John Hickenlooper, state leaders, and industry officials long have hailed as the toughest in the nation.

They rely on this 27-year-old state exemption to give oil and gas companies 90 days to pollute, then assess what they need from Colorado regulators before applying for the air permits that set limits on emissions from industrial sites.

“It is a loophole that allows pollution at some of the times when the pollution is the most extreme,” said US Rep. Diana DeGette, D-Denver, who chairs a congressional panel that oversees the Environmental Protection Agency.

Colorado’s practice may not be legal under the federal Clean Air Act. While oil and gas companies are required to install controls to minimize emissions during the 90-day window, state inspectors do not check unless they receive specific complaints. State health officials told The Denver Post they have begun a review of whether the exemption complies with federal law. This comes as Gov. Jared Polis has signaled his intentions to try to improve Colorado’s deteriorating air quality.

Industry officials say they run their facilities to meet state health standards whether they are operating within the 90-day exemption period or have obtained permits—but need the flexibility to determine how much a site will pollute before limits are set.

“The permitting requirements in Colorado are some of the most stringent in the United States, and having an appropriate amount of time to test and measure potential emissions from a production facility is important to ensure data integrity,” Anadarko Petroleum spokeswoman Allyson Manley said. “Air quality is impacted by many different sources in the DJ Basin, and reducing emissions from our operations has been and will continue to be a major focal point for us.”