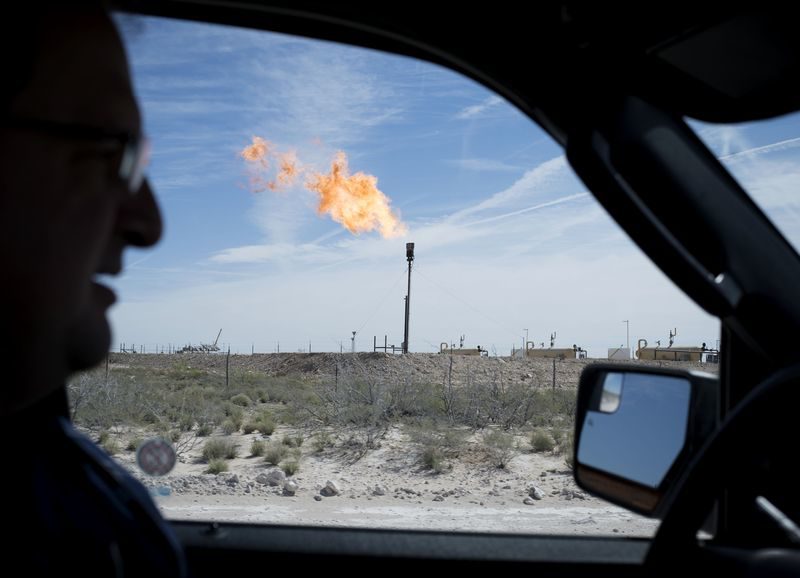 America’s hottest oil patch is producing so much natural gas that, by the end of last year, producers were burning off more than enough of the fuel to meet residential demand across the whole of Texas. The phenomenon has likely only intensified since then.

Flaring is the controversial but common practice in which oil and gas drillers burn off gas that can’t be easily or efficiently captured and stored. It releases carbon dioxide and is lighting up the skies of West Texas and New Mexico as the Permian Basin undergoes a massive production boom. Oil wells there produce gas as a byproduct, and, because pipeline infrastructure hasn’t kept pace with the expansion, energy companies must sometimes choose between flaring and slowing production.

“It’s a black eye for the Permian basin,” Pioneer Natural Resources Chief Executive Officer Scott Sheffield said at an energy conference at Columbia University in New York. “The state, the pipeline companies, and the producers—we all need to come together to figure out a way to stop the flaring.”

The amount of gas flared in the Permian rose about 85% last year reaching 553 million ft3/D in the fourth quarter, according to data from Oslo-based consultant Rystad Energy. Local prices that are hovering near zero will remain “under stress” until more pipelines come online, Moody’s Investors Service said in a note.

There will always be a “mismatch” between the amount of gas produced and pipeline capacity, so some flaring is inevitable, according to Ryan Sitton, the head of the Railroad Commission of Texas. Despite what its name suggests, his agency oversees the oil and gas industry in the state and regulates flaring, allowing companies to burn gas for limited periods or in times of emergency.

Some 4 billion ft3 of pipelines are expected come online in the next year or so, which will likely reduce, but not eliminate, the need to flare, the commissioner said in an interview.