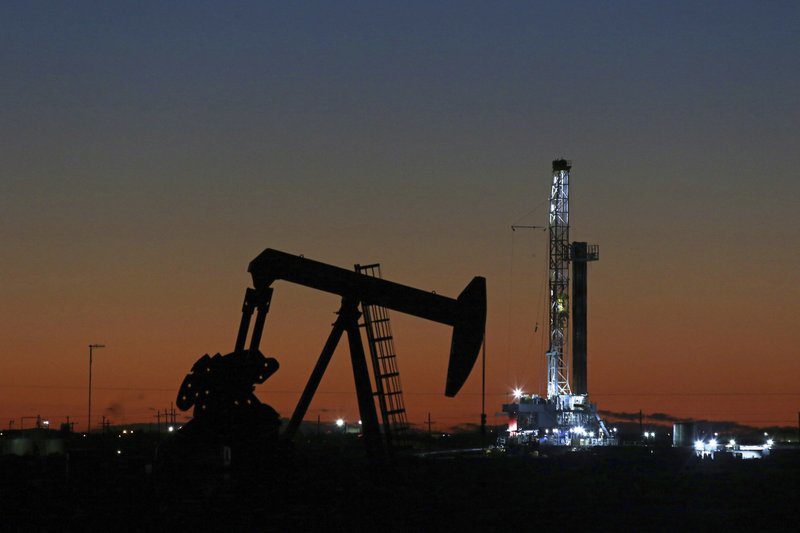 Credit: Jacob Ford/Odessa American via AP.
This 9 October 2018 photo shows an oil rig and pump jack in Midland, Texas. The Environmental Integrity Project noted in a report released on 9 May that the Permian Basin, which include some West Texas cities, such as Midland, is one of the most productive hydrocarbon regions in the world. But the report says a consequence of that production is dangerous levels of sulfur dioxide escaping into the air around Odessa and other locations.

The production of oil and natural gas in West Texas is booming, but it’s coming at a cost to residents who are regularly exposed to unhealthy levels of air pollution, according to a report issued by an environmental group.

The Environmental Integrity Project noted in a report released on 9 May that the Permian Basin, which extends into New Mexico, is one of the most productive hydrocarbon regions in the world, thanks largely to the advent over the past decade of horizontal drilling and hydraulic fracturing. In another 2 years, the basin will account for approximately 40% of all US production, the group said.

But a consequence of that production is dangerous levels of sulfur dioxide in the air around Odessa and other locations, according to the report, which adds that pollution levels in much of Ector County, where Odessa is located, exceed standards set by the federal Environmental Protection Agency.

Ilan Levin, associate director of The Environmental Integrity Project, said regulators such as the Texas Commission on Environmental Quality (TCEQ) need to have stricter oversight of air pollution permits while penalizing polluters who violate the terms of those permits.

“It’s like they’re speeding and the cops out on the beat are not issuing any speeding tickets,” Levin said.

A spokesman for TCEQ declined to comment, saying the agency hadn’t seen the report. The president of the Texas Oil and Gas Association said the industry group also must still review the report but is confident that Permian Basin production will continue to be viewed as a benefit to the state and the nation.

“Upon release to the public, we will review the full study, but there is no doubt that the phenomenal growth of energy production in the Permian Basin, which has elevated the United States to become the world’s top oil and natural gas producer, is providing undeniable benefits to Texas in the form of abundant, reliable, and affordable energy, hundreds of thousands of good-paying jobs, and billions in state and local tax revenues,” Todd Staples said. “And all of these have occurred while at the same time the US has led the world in emission reductions, undoubtedly because the oil and natural gas industry is the leading investor in zero- and low-carbon technology, investing billions in advanced technologies that are protecting and improving our environment.”