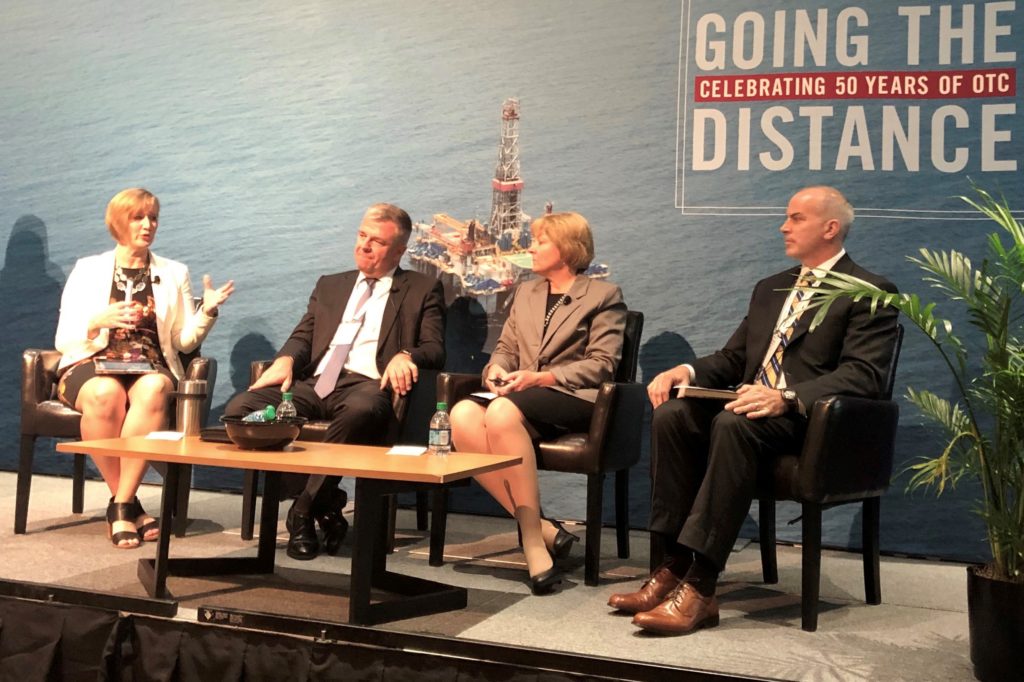 Schlumberger no longer tracks its employees’ driver scores. Instead, employees use a mobile app to rank themselves. At Chevron, a smart badge alerts crane operators when a worker is too close to a crane load. BP uses SAP Predictive Analytics software and wearable devices to protect people from falling objects.

Participants on an Offshore Technology Conference panel sponsored by the Center for Offshore Safety discussed these and other examples of the ways that digitalization and new technology are disrupting old practices and shaping a new safety landscape for the oil and gas industry.

“Technology pivots us to more agile ways of thinking by lowering the barriers to change and preventing us from reverting to old, ‘safe’ ways of doing things,” said Jen Hartsock, panel moderator and chief information officer for Baker Hughes, a GE Company. “If an app stops working for us, we’ll find another one.”

“Digital helps us pivot fast for better outcomes,” said Rhonda Yoder, Chevron’s upstream general manager for health, environment, and safety. “It’s not about failing fast; it’s about the ability to fail and adjust and go about things differently,” she said.

Yoder cited Chevron’s electronic permit to work as an example. A permit to work is a document that specifies the task to be performed, associated foreseeable hazards, and safety measures. The permit-to-work system has been used widely to ensure safety during maintenance and construction activities in almost every major hazardous industry worldwide. The digital solution to the paper-based system offers work-order integration, risk assessment, isolation of hazardous energy, competency management, lessons-learned sharing, and continual improvement measures. The format and content of the paper permits can be adopted in the electronic system.

“A couple of years ago, we would have spent multiple years planning a perfect process, designing a full digital solution, testing it, and compiling proof of concept,” Yoder said. “Now, we can have true proof of concept before committing to the tool. We can talk to the people doing the work, to learn and grow the solution while piloting it.”

Yoder said that digital disruptions such as the electronic permit to work are aiding a shift from reactive to proactive analytics and, in the process, lowering financial barriers to entry to change. “Instead of pursuing multiyear, multimillion-dollar projects, we are finding ways to make progress that feed the next generation of capabilities,” she said. “By freeing the data and bringing it closer to the people on the front lines who can use it, we can now drive conversations about risk and safeguards rather than lagging indicators.”

Richard Osmond, BP’s vice president of safety and operational risk for the Gulf of Mexico and Canada, said his company is adapting lessons learned from the aviation and nuclear industries to improve efficiency. “There is still so much waste in our companies and systems,” he said. “Only about 3% of the data we collect is put to good use. Digitalization is helping us remove the complexity of system architecture and get it out of the way.”

Osmond explained that, by using SAP Predictive Analytics software and spending some time to get clear on the processes it wants to improve, BP has developed, proved the concept, and implemented a solution that makes it possible to model and predict up to nine of every 10 personal injury incidents.

Jim Andrews, Schlumberger’s vice president for health, safety, and environment, said his company is focused on mobile technology. “Driving is the single most dangerous thing we all do,” he said. “For years, Schlumberger has sent our new-hires to driving centers to learn how to drive safely. In the process, we have collected terabytes of data that we don’t use.”

Andrews continued: “We went out about 3 years ago to see what was available to help us use all that data, and we found a company called Green Road that develops mobile apps. We used one of their apps in conjunction with our annual commentary drives, in which certified driving instructors take employees for a 30-minute drive and comment on their performance.” With the app, Andrews said, drivers can use their mobile phones to monitor how they drive every time they get behind the wheel. The app provides commentary and proactive advice and integrates Waze information and weather conditions. “Over a period of 18 months, we’ve seen a staggering change in the way employees are driving, in a company that has always taken a great deal of pride in our driving performance,” he said. “All a driver has to do is plug in the destination and focus on driving; the technology does everything else.”

Another example of a digital solution for a high-risk industrial operation is Chevron’s wearable CraneTagz. Chevron collaborated with Accenture on the device, which is currently a semifinalist for the 2019 National Safety Council’s Green Cross for Safety awards. Workers near cranes can’t always keep track of the location of a suspended load in motion and, as a result, sometimes end up in the load’s path, or cone of exposure. Accenture and Chevron collaborated to design a digital safeguard to increase workers’ awareness of crane loads, improve the ability to locate field personnel, and alert crane operators when workers are too close to a crane load.

The CraneTagz badge produces audio and visual alerts when workers are in dangerous proximity to heavy machinery, including cranes and forklifts. The system uses precision technology that determines a worker’s position with an accuracy of 6 in., while using sensors to determine the position of the crane loads. The technology underpinning this solution, including a wireless network, establishes a foundation upon which smart, connected devices and more advanced technologies can be used to reduce, and possibly eliminate, worker exposure to hazardous conditions and situations, according to Chevron.

The panelists agreed that the safety-management systems the industry has spent years building are not as strong as they need to be and that digital disruption is helping resolve that.

“Our best intentions with some management systems have been a bit complex and burdensome, and maybe we haven’t really imparted the safeguards we think are in place,” Yoder said.

“Now, we’re finally having the right conversation, which is, ‘How do we put the information, tools, and systems in place to make it easier for people to do the right things and make it harder to do the wrong things, to work safely?” she said.