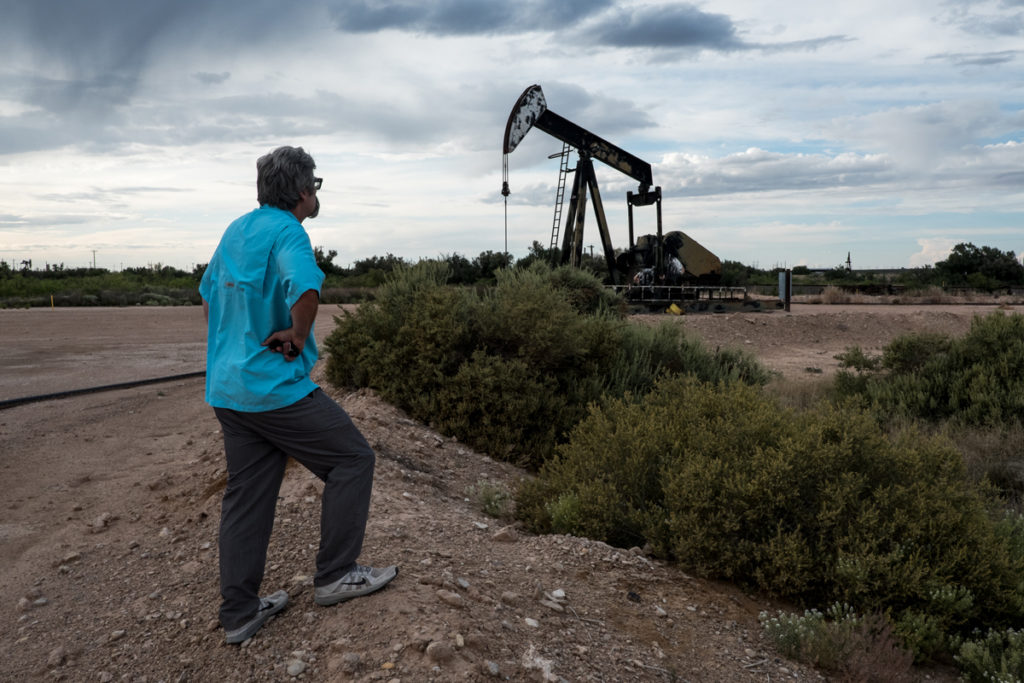 Credit: Joel Angel Juárez/High Country News.
Dee George gazes at an oil pump jack near the Pecos River near his home in Carlsbad, New Mexico, part of the oil-rich Permian Basin, which stretches from southeastern New Mexico into Texas.

When Dee George was about 7 years old, his family moved to the outskirts of Carlsbad, New Mexico, where they bought an acre of land, set up a mobile home and planted mulberry trees. They had a clear view of the sunset, and birds flocked to the trees. George, now 53, still lives there with his wife, Penny Aucoin, and daughter Skyler.

Oil and gas development has existed for years in the Permian Basin, which stretches from southeastern New Mexico into Texas. But about 5 years ago, the boom landed on the George family’s doorstep when Mack Energy started clearing a well pad in the field just across the road. In Carlsbad, wells can legally be drilled within 500 ft of homes. Outside city limits, where this family lives, the minimum is 300 ft. That well shook the family’s home like an earthquake—literally and figuratively. “I always thought, ‘This is a good thing,’” said Aucoin, noting the jobs and revenue drilling brought to the state’s southeastern corner. “Until they moved in next door to me.”

Fueled by high oil prices and advances in drilling techniques, the Permian Basin has become the nation’s busiest oil field. Meanwhile, for people like George and Aucoin, life has become noisy, the once-quiet roads crowded and dangerous. The family has also suffered from enigmatic illnesses that might, or might not, be related to the boom; the science can’t keep pace with the frenzied rate of drilling. The lack of information and options has the family reeling. Others had similar experiences.

After the well pad went in, the drilling began, shaking the house day and night and keeping the couple, their teenage son and daughter awake. The noise and vibrations made Skyler, who was 4 years old at the time, hold her ears and shake her head, until George and Aucoin put earmuffs on her.

That was only the beginning. More wells have popped up, clogging even the narrowest back roads with traffic. Accidents in Eddy County shot up by 70%—not including those with fatalities—between 2016 and 2018 alone, according to the sheriff’s office. Once, when Aucoin’s son was trying to turn onto the county road, with Skyler in the backseat, a truck crashed into his vehicle.

George and Aucoin now park their car directly between their house and the road, for safety. This way, if a speeding truck runs off the road, it will hit the parked car before it hits their bedroom wall. When oilfield trucks started rumbling down the dirt road just south of their house, they kicked up rocks that flew like projectiles toward Skyler’s trampoline. So they got rid of the trampoline. But there was no such easy fix for the constant dust and exhaust from the trucks, nor for the family’s persistent, unexplained ailments. Skyler contracted a dry cough that didn’t go away, and the humidifiers the doctors recommended did not help.

Aucoin, 49, a former school bus driver now working toward a degree in social work, found herself plagued by piercing headaches of unknown origin. Her doctor tried half a dozen medications but nothing has eased the pain. Blisters appeared on her face. She used to sit on the porch, waiting for Skyler’s school bus; now she stays inside.

After the first well went in, Aucoin’s son started experiencing gushing nosebleeds almost every day. They seemed to occur out of the blue, when he was doing the dishes or sitting in math class. A doctor recommended that his nose be chemically cauterized, which helped for a couple of days, but then the bleeding resumed. Now the boy mostly lives in Roswell, about 75 miles north of Carlsbad, where his nose doesn’t bleed.

The combined weight of these maladies, Aucoin said, are “destroying us.” In the past few years, new wells have appeared within sight of their home in every direction.