As North Dakota Oil Soars, So Does Waste of Natural Gas 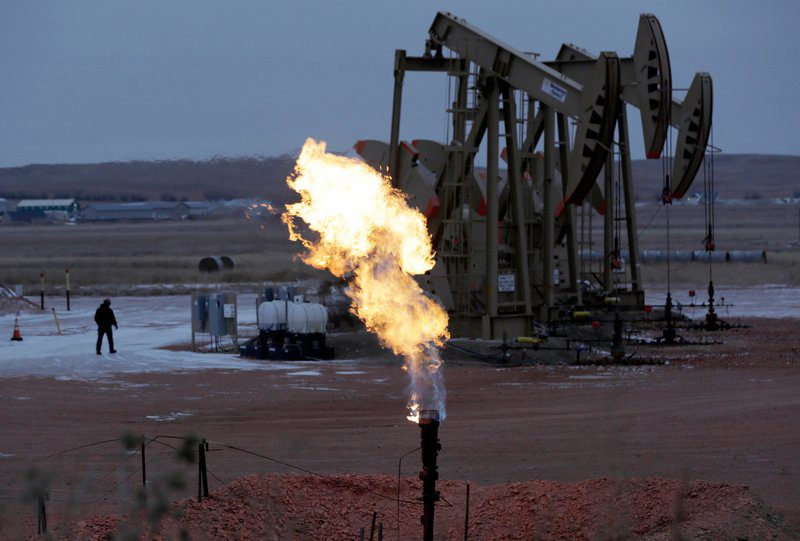 Credit: Eric Gay/AP.
In this 22 October 2015 file photo, workers tend to oil pump jacks behind a natural gas flare near Watford City, N.D. Natural gas is being burned off and wasted at record levels in North Dakota because development of the pipelines and processing facilities needed to handle it has not kept pace. Natural gas production hit a record in March, but about 20% of it went up in flames through flaring.

North Dakota oil drillers are falling far short of the state’s goals to limit the burning of excess natural gas at well heads, 5 years after the state adopted the rules to reduce the wasteful and environmentally harmful practice.

The industry has spent billions of dollars on infrastructure but is at least 2 years from catching up, and regulators are projecting that the state’s increasing gas production will still outstrip that new capacity.

Environmentalists and even a key Republican say the problem will persist as long as the state doesn’t take a tougher approach with the industry, which has largely avoided financial penalties.

“We need to find an excess flared gas solution immediately,” said Republican Rep. Vicky Steiner, whose hometown of Dickinson is in the heart of the state’s oil patch. “It’s a shame. I’d like to see us find a use for this.”

“Compliance with the state’s flaring policy is not working,” added Wayde Schafer, spokesman for the state’s Sierra Club chapter. “We need to revisit the policy.”

Flaring is the practice of burning off natural gas that is produced as a byproduct of oil drilling. It’s a picturesque feature of the oil patch, especially at night, but it means wasted money and unnecessary carbon dioxide emissions that worsen global warming.

Oil companies endorsed the rules but struggled to meet them from the start. Most have often missed them.

In March, drillers produced a record 2.8 Bcf of natural gas per day, but about 20% of it went up in flames. That was well above the current limit of 12%—and was enough to heat all North Dakota homes for a month 10 times over, according to an analysis by the legislature’s research agency.

March also was the 13th month in a row that drillers missed the target.

About $4 billion in gas processing plants and pipelines is scheduled to come on line within the next 2 years, boosting gas-gathering and -processing capability by 56%. That would be enough to handle most of the gas produced in the state at present.

But Justin Kringstad, director of the North Dakota Pipeline Authority, said projections show that oil production and its associated gas in 2 years will outpace even that added capacity. North Dakota is the nation’s No. 2 oil producer behind Texas.