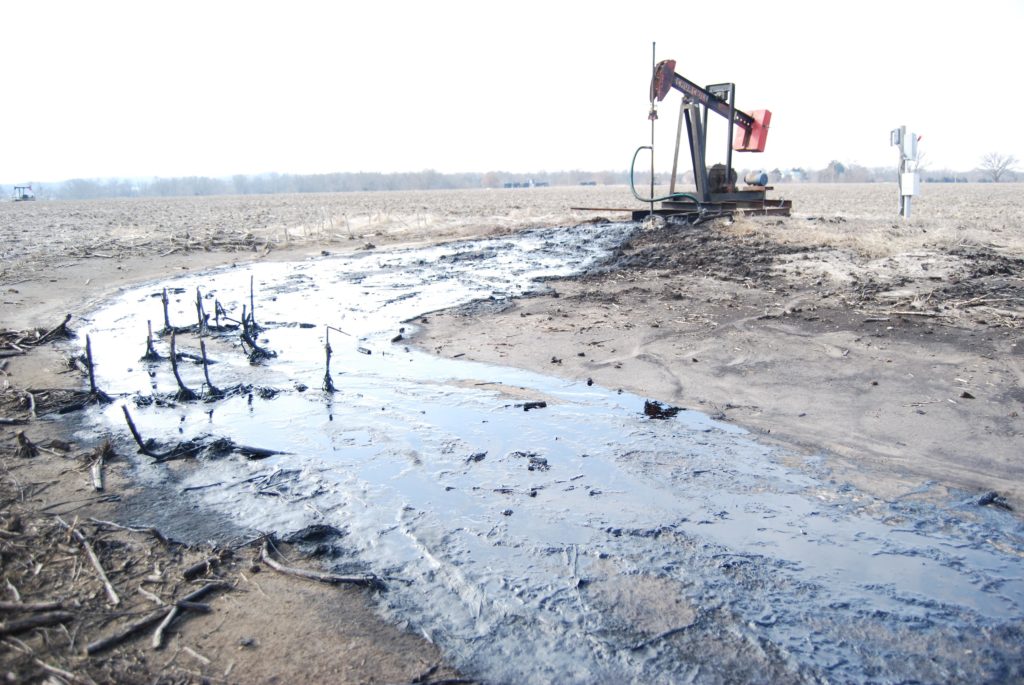 Credit: Tim Carpenter/The Capital-Journal.
The Kansas Corporation Commission lists 22,000 abandoned oil and gas wells statewide, but the industry-funded program has plugged fewer wells in recent years at the same time demand for remediation at well sites escalated. This image is from a leaking pump jack in Douglas County.

Judith Wells brought her car to a slow crawl on a gravel road in Douglas County.

She wasn’t marveling at the beauty of nature or the toil of modern farmers. Nor was she drawn to the sprinkling of lovely rural homesteads.

She was intent on consuming details of crude pooling at the base of a pump jack within shouting distance of Little Wakarusa Creek. Nearby, within the same field, a second jack was surrendering enough thick black oil to scar another slice of ground.

It is the kind of discovery fueling Wells’ mission to convince the oil and gas industry to adhere to state laws, regulations and rules when extracting or depositing energy-related materials in Kansas. It is a quest that put her in conflict with the Kansas Corporation Commission (KCC), which is responsible for oversight of the energy sector.

Years ago, she bought property in Douglas County without being informed it had unplugged wells on the land. She emerged as a thorn in the side of eastern Kansas operators by injecting herself into the debate about how to deal with operators who abandon wells.

“This is a big ball of worms,” Wells said. “I’m not against oil. I’m against dirty oil.”

The number of deserted oil and gas wells in Kansas blossomed during the past five years to 22,000. The KCC’s annual reports revealed a fund created in 1996 to finance plugging of wells to be inadequate if the objective was to keep pace with demand for plugging.

The annual budget for plugging has drifted between $1.2 million and $2 million for a decade, with the low side of that range common. The fund is supported exclusively by the oil industry.

“The funds barely exist,” Wells said. “If taxpayers aren’t tapped for these problems, the wells will truly sit open and unattended.”

Epicenter of abandonment is a 32-county area of eastern Kansas served by the KCC’s field office in Chanute. More than 19,000 abandoned wells on Kansas’ list reside in that zone. One-fourth have been prioritized as “requiring action” by the KCC, primarily because of risk for groundwater contamination by defunct wells.

Taste of the Tension

KCC chairman Dwight Keen, who previously operated an independent oil and gas company and was chairman of the Kansas Independent Oil and Gas Association, said the industry was “pretty responsible” in dealing with orphan wells.

Some discarded wells were drilled decades ago, he said, and it isn’t clear who to blame or what company to hold liable. The KCC doesn’t have staff or resources to chase down every absconder who didn’t have the cash or desire to cap unneeded wells.

Keen said another problem was lack of contractors eager to bid on plugging work in Kansas, in part, because of density of the KCC bureaucracy. Plugging typically costs at least $12,000 for deep wells in western Kansas and around $5,000 for shallow holes in the east.

“It’s a difficult challenge, but it is one that we will master. We have to,” Keen said. “We’re trying as many unique avenues to protect our freshwater resources.”

Joe Spease, of the Kansas Sierra Club, said the problem festered because of the oil and gas industry’s deep political influence in the Legislature and on the KCC, which has three members appointed by the governor.

He said industry profit has been viewed as more important than public safety or environmental preservation.

“That can and must be stopped,” Spease said. “Solutions to the problem are simple. Require oil and gas companies to assume the cost of plugging any well they use. If a company, and the individuals running it, fails to plug a well, they would be forced to immediately stop all business in the state until the well is plugged.”