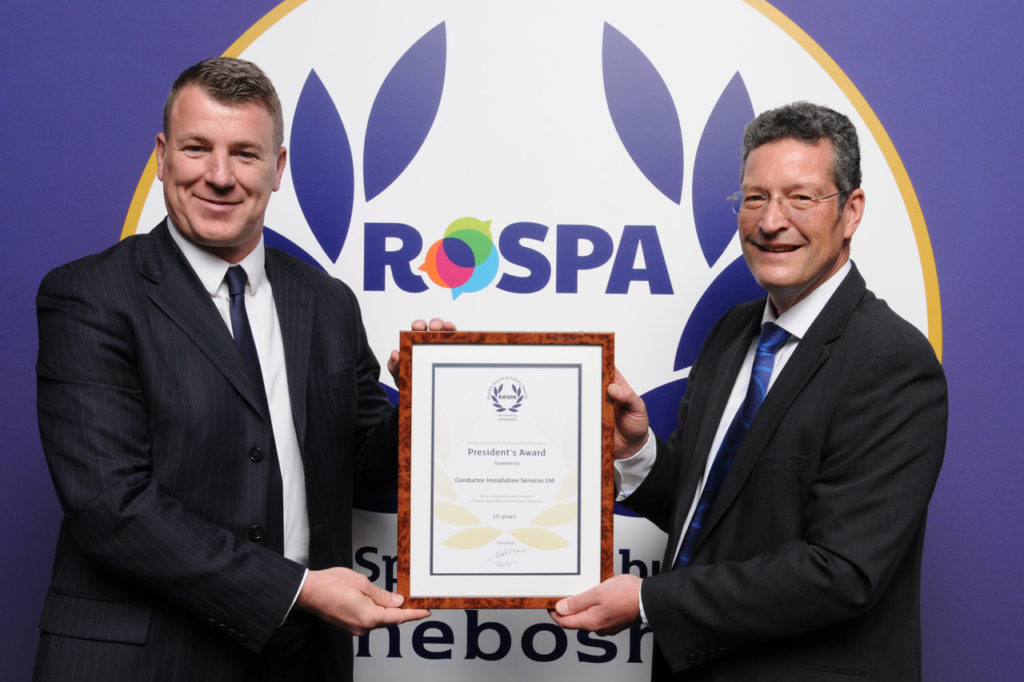 Credit: CIS.
Mark Ramsden, QHSE manager for CIS, left, receives the President’s Award for Occupational Health and Safety on behalf of CIS from Errol Taylor, chief executive of  the UK’s Royal Society for the Prevention of Accidents. The award recognizes CIS for earning its 10th consecutive Gold Medal. The company has operated without a single accident or lost-time incident since it opened in 2005.

CIS, an Acteon Company that installs conductors and piles for the oil and gas and nearshore marine construction industries, has been awarded the President’s Award for Occupational Health and Safety from the UK’s Royal Society for the Prevention of Accidents (RoSPA). The President’s Award recognizes CIS for earning its 10th consecutive Gold Medal, which is awarded in honor of an organization’s commitment to preventing accidents and ill health.

14 Years Without A Lost-Time Incident

Since opening its doors in 2005, CIS has executed more than 1,500 pile and conductor installation operations for the nearshore marine, subsea, and oil and gas industries around the world. During that time, CIS has operated without a single accident or lost-time incident.

“Whether it’s driving piles for foundations in the nearshore marine construction market, installing pin piles for subsea marine contractors or conductors for oil and gas wells, we are extremely vigilant when it comes to safety,” said James Chadd, managing director for CIS. ”Our mission is to ensure that our industry has a bright and buoyant future. One of the ways we aim to achieve this is to ensure that it is safe. As we enter our 14th year of operation, this award is particularly meaningful because it also represents the fact that our dedication to safety has produced an outstanding performance history, without a single safety or lost-time incident. Our people are the driving force behind our health and safety management system, which is the foundation of this achievement. I am extremely thankful for their efforts, each and every day, to make health and safety a top priority.”

The RoSPA Awards criteria takes into consideration not only accident records but also the entrant’s overall health and safety management systems, recognizing practices such as strong leadership and workforce involvement. For CIS, this means that the company demonstrates outstanding commitment to protecting the health and safety of all employees and customers.

CIS provides pile and conductor installation services associated with construction projects for the nearshore marine and civil markets and the oil and gas industry. Since its founding in Great Yarmouth, England, in 2005, CIS has not incurred a single lost-time incident. CIS has been awarded the Gold Medal for Occupation Health and Safety for 10 consecutive years, resulting in a President’s Award from the Royal Society for the Prevention of Accidents (RoSPA) this year. It is the highest award for safety in the United Kingdom.