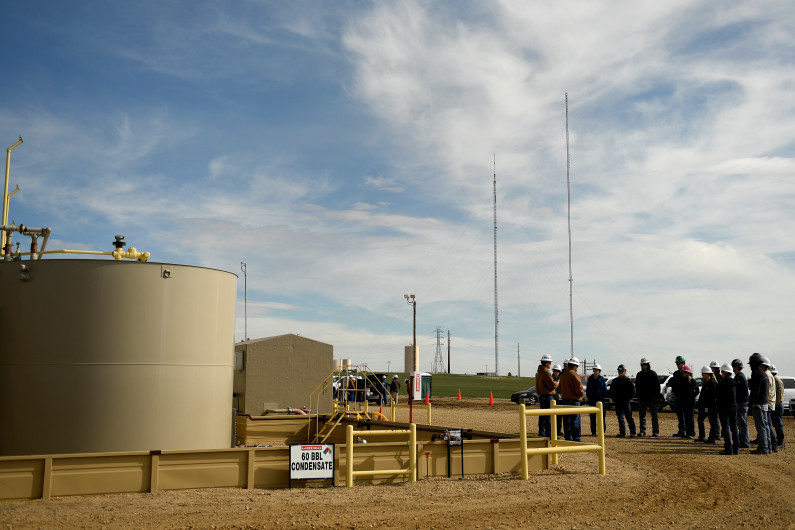 Credit: Joe Amon/The Denver Post.
The Colorado State Department of Public Health and Environment Oil and Gas Team held a field day explaining air inspections at oil and gas well’s and how they are done at the Troudt battery along Highway 52 in Weld County on 17 April 2019 in Weld County.

Colorado oil and gas regulators are moving to rein in Weld County in the era of Senate Bill 181, the law passed this spring that gives more power to local governments to manage energy extraction within their borders.

At issue is whether cities, counties, and towns can enact rules for drilling that are less restrictive than those on the books—or soon to be put on the books—at the state level.

According to the interpretation of some in Weld County, they can be. Colorado regulators don’t necessarily disagree, but they want Weld County officials and oil and gas companies to know that state rules maintain supremacy and will override anything weaker adopted at a local level.

In a letter sent to the Weld County Attorney’s Office, state officials emphasized that the Colorado Oil and Gas Conservation Commission (COGCC) maintains the authority to regulate and manage oil and gas well siting in the unincorporated portions of the country regardless of additional regulatory powers granted county government through SB-181.

“While SB 19-181 provides local governments with siting authority over oil and gas surface locations, it does not diminish the COGCC’s authority to regulate the orderly development of oil and gas throughout the state,” reads the letter, written by Colorado Senior Assistant Attorney General Kyle Davenport. “To the contrary, SB19-181 reaffirms the critical role for the COGCC in numerous places.”

The letter, delivered to Colorado’s top energy-producing and most industry-reliant county, comes on the heels of the Weld County commissioners unanimously approving the creation of a new internal oil and gas department on 8 July. The department, expected to open for business next month, is being set up to permit, regulate, and enforce surface and air regulations for drilling sites in unincorporated Weld County, according to a county news release.

The commissioners passed a resolution in June designating the unincorporated portions of the county a “mineral resource area of state interest.” Piggybacking on that, the board adopted an ordinance that granted the county’s new oil and gas office so-called 1041 powers to permit and regulate activities in the designated area. The way the commissioners see it, the state’s letter seeks to undermine the core goal of SB-181: giving local governments more control over the industry in their borders.

“When the state legislature passed SB 19-181, the state gave local governments expanded local-government authority with regard to land use,” the commissioners said in a statement released following the meeting. “It was very clear that the state cannot preempt local land use authority or interfere with the siting of oil and gas locations and facilities.”

Weld County Attorney Bruce Barker didn’t dispute that the state has oversight over the technical aspects of energy extraction but said other aspects of regulation such as how far wells must be set back from buildings are a land-use issue that is the arena of local municipalities.

Nowhere in SB-181 does it say that local rules cannot be less strict than those of the state, according to his reading.

“Land use is about protecting public health, safety, welfare, and wildlife and the environment,” Barker said. “Who better to have making those determinations than local elected officials? You would get the same answer from any county in the state. Local elected officials, not an appointed commission in Denver.”