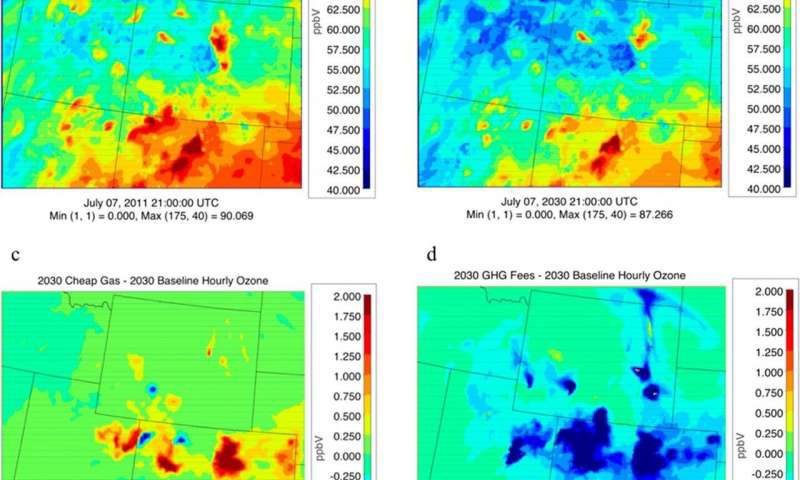 Research by Drexel University and the University of Colorado at Boulder suggests that imposing fees on energy producers that emit greenhouse gas could improve the health and financial well-being of the Rocky Mountain region.

Using sophisticated modeling programs that can project atmospheric concentrations of ozone, a ground-level pollutant, by considering factors such as current emissions from power plants, weather trends, and changes in energy production, the team compared the effects of four scenarios on the Rocky Mountain region of 2030. Their findings were recently published in the journal Environmental Science & Technology.

Looking closely at coal, oil, and natural gas production regions in Colorado, Utah, Wyoming, and northern New Mexico—a region in the midst of planning its energy production transition over the next several decades—the team proposed four energy production policy scenarios, any of which could very well be in effect by 2030.

"Opportunities to produce power through newly accessible oil and gas as well as renewable resources have increased rapidly in the Rocky Mountain region, which has a growing population," said Shannon Capps, an assistant professor in Drexel's College of Engineering who helped conduct the research. "The region needs more electricity and has choices about how to produce it. This analysis helps people understand the implications of different choices, some embedded in infrastructure that will shape climate and air quality in lasting ways."

The first is a baseline scenario in which current transitions away from coal energy and toward natural gas, including the planned closing of several coal plants and the creation of new natural gas extraction sites, are taken into consideration.

Two scenarios consider the effects of changes in the cost of energy production from natural gas—either that it will be more expensive to produce than coal or that it will continue to be less expensive.

The final scenario considers the possibility of fees being imposed on the producers of greenhouse gas—a policy that has been proposed by the previous administration's Clean Power Plan and proponents of the Green New Deal.

The group used recent results from energy-grid modeling under the different scenarios to calculate realistic emissions of greenhouse gases—carbon dioxide and methane—sulfur dioxide, nitrogen oxides, volatile organic compounds (VOCs) for atmospheric modeling programs that determine the associated amount of ozone. The team then used a tool created by the Environmental Protection Agency to determine how the ozone in each scenario would affect the health of people in the region and also calculated the social costs of the associated greenhouse gas emissions.

Their research predicts that, in all scenarios, other than the one in which natural gas production becomes less costly, greenhouse-gas emissions would be reduced following the closure of plants—whether by planned retirement as in the 2030 baseline scenario or as a cost-saving measure as in the "expensive gas" and "greenhouse gas fees" scenarios.