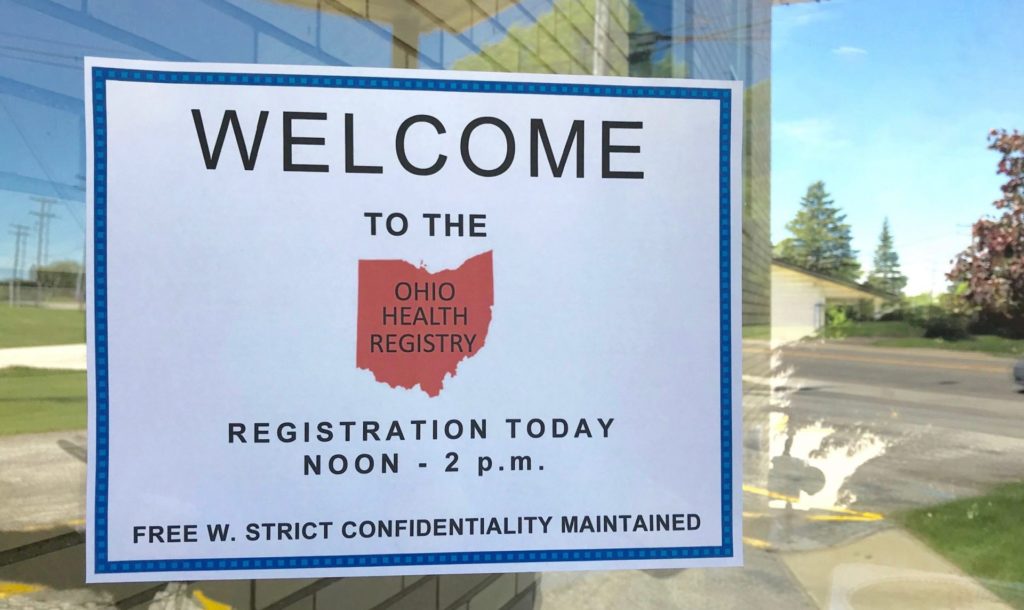 Credit: Julie Grant/The Allegheny Front.
The Ohio Health Registry, started by a physician, hopes to sign up 200 people who live near oil and gas activity.

A dozen people are scurrying around a church basement in Youngstown, Ohio. They’re arranging tables and chairs, setting up paperwork, and hanging up signs that read, “Ohio Health Registry.”

“The Ohio Health Registry is really an attempt to collect the contacts of people who live close enough to any aspect of shale development that they might be affected,” said Deborah Cowden, a family physician from the Dayton area, who started the effort.

Cowden drove three and a half hours east this morning to organize the registration, while others came in from Oberlin, Cleveland, and Lake County to register people in Youngstown.

“This is the medical questionnaire, and I’m going to read some instructions,” a registrar tells one person who has shown up to fill out the forms, which take about 15 minutes to complete.

Participants are asked their proximity to gas development and about any current health symptoms—everything from levels of fatigue, nausea, and asthma to whether they have a diagnosis of cancer, their mental health, and their family health history.

Martin Senganec, 60, who is a truck driver, filled out the registration forms at a similar event in nearby Lowellville. He’s heard about a new fracturing waste injection well being permitted near his home. “I live less than a mile from what they’re building there, and I’m worried about it,” he said.

Sengenec remembers the magnitude 3.0 earthquake near here 5 years ago that Ohio regulators linked to hydraulic fracturing. He’s also concerned that this area has become a dumping ground for fracturing wastewater, a high salinity, chemical-laced brine.

Sengenic doesn’t think the state is ensuring that his drinking-water well will be protected from contamination.

“They say it’s not going to harm. I have well water, all the people around here have well water, and that’s what I’m worried about. If that hurts that … once the well is contaminated, you can’t do nothing with it,” he said.

Sengenic said he doesn’t know how the health registry will help. “I’m not sure, to be honest with you. It might not do anything, I don’t know,” he said.

Links Between Hydraulic Fracturing and Health

More and more studies have been making connections between living near gas development and the risk of some health problems, such as headaches and anxiety, low-birth-weight babies, and cancer.

Cowden wants the health registry to provide data that will help further this kind of research as hydraulic fracturing continues to grow in the state.

“If we are going to do this, why are we not attempting to keep track, so that we might be able to help people if they have a problem?” she asked.

Ohio regulators say they do respond to health concerns. Rebecca Fugitt, assistant chief of the Bureau of Environmental Health and Radiation Protection at the Ohio Department of Health, says they don’t get many complaints from citizens about the hydraulic fracturing industry.

The Ohio Department of Natural Resources (ODNR), which regulates the oil and gas industry, also gets few health complaints from people living near these operations. The Allegheny Front analyzed thousands of complaints by citizens to ODNR between 2009 and 2018 and found just 10 reporting headaches, rashes, or breathing problems. But ODNR did receive 438 complaints about odors, according to The Allegheny Front’s research. Certain odors can indicate pollutants in the air.

Fugitt says the health department does respond to citizens who think pollution from oil and gas development, or anything else, is harming their health.

“We work with them on a case-by-case basis to investigate their complaint,” she said. “And then, if necessary, we coordinate with other state agencies to collect environmental data as needed to respond to their concerns to determine if they have been exposed to any contaminants.”

Fugitt says Ohio tracks various health statistics, just not specifically in relation to fracturing activity. Pennsylvania and Colorado do have registries for people living near the oil and gas industry to report their health concerns.