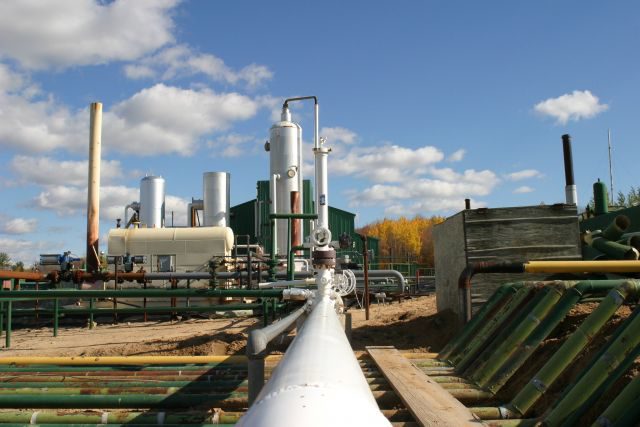 Credit: US Department of Energy.
Carbon dioxide removed from the air can be used to extract oil, such as at this Michigan facility.

Earlier this year, Occidental Petroleum announced plans to draw half a million tons of carbon dioxide (CO2) out of the atmosphere each year with Carbon Engineering's "direct air capture" technology. Occidental will then pump that CO2 into its oil fields in Texas, where it will release trapped oil and increase production. The pumped CO2 will remain stored underground.

On its face, boosting oil production seems counterproductive: To limit global temperature rise to 1.5°C (2.7°F) and prevent the worst climate effects, the Intergovernmental Panel on Climate Change (IPCC) says oil consumption need to be cut roughly 40–80% by 2050. Can pumping CO2 into the ground to extract more oil actually help in the fight against climate change?

Climate models show that removing CO2 from the atmosphere at a large scale will be critical for limiting global warming to 1.5 or even 2°C. But first, we need to develop the technology further and lower its cost enough to scale it around the world. Right now, coupling direct air capture with enhanced oil recovery (known together as CO2-EOR) is the most economically viable strategy to do this.

CO2-EOR, largely overlooked to date, could also be a powerful strategy to reduce emissions from oil consumption until the world completes the transition to clean energy. Under the right conditions, it is even possible to achieve net CO2 removal from the atmosphere by combining direct air capture with CO2-EOR. But, whether this technology will reduce net emissions depends on several key factors.

What Is Direct Air Capture and Why Does It Matter?

Direct air capture is a chemical scrubbing process that directly removes CO2 from the outside air. Most climate models indicate the world will need to be removing several billion tons of CO2 from the atmosphere each year by 2050—as much as double the current annual emissions of the United States—in order to stabilize global temperature rise to 1.5 or 2°C.

A recent study examining least-cost pathways for doing so found that direct air capture makes the task much easier—significantly lowering the marginal cost of achieving either temperature target according to the preliminary models used for this analysis. Although direct air capture is just one of several ways to remove CO2 from the atmosphere, the technology is easier to scale up than other options identified to date. The authors warn, however, that these preliminary results should not be used as an excuse to slow down investment in clean energy or other carbon removal options, like restoring forests or using soil to store carbon.

What Does Direct Air Capture Have To Do With Oil?

With an adequate price on carbon emissions or subsidies for carbon removal, it would be economic to use direct air capture to pull CO2 from the atmosphere and simply store it underground. But, existing federal policy incentives in the United States are not enough to support the cost of direct air capture and storage. Like with any new technology, the direct air capture industry will need years to drive costs down by gaining manufacturing experience, accumulating many minor innovations over time, and standardizing supply chains.

Enter enhanced oil recovery, which is the most economically attractive way to use captured CO2 today. Other markets for CO2 will emerge, but today's markets, such as carbonated beverages, are relatively small. The National Academies of Sciences have said the cost of existing direct air capture technology could fall from several hundred dollars per ton of CO2 to about $100 per ton. Each ton of captured CO2 can be used to produce as much as 2–3 bbl of oil. At today's $60/bbl, the process might even pay for itself—and the federal government offers an additional $35 per ton tax credit for CO2-EOR.

In sum, deploying direct air capture in the near-term is critical if the technology is going to be affordable at a truly large scale in the coming decades. Enhanced oil recovery is the most-economic way to do that until the federal government puts a price on carbon emissions or substantially increases the tax credit for CO2 storage.