The Permian Boom Collides With a Governor's Climate-Change Push 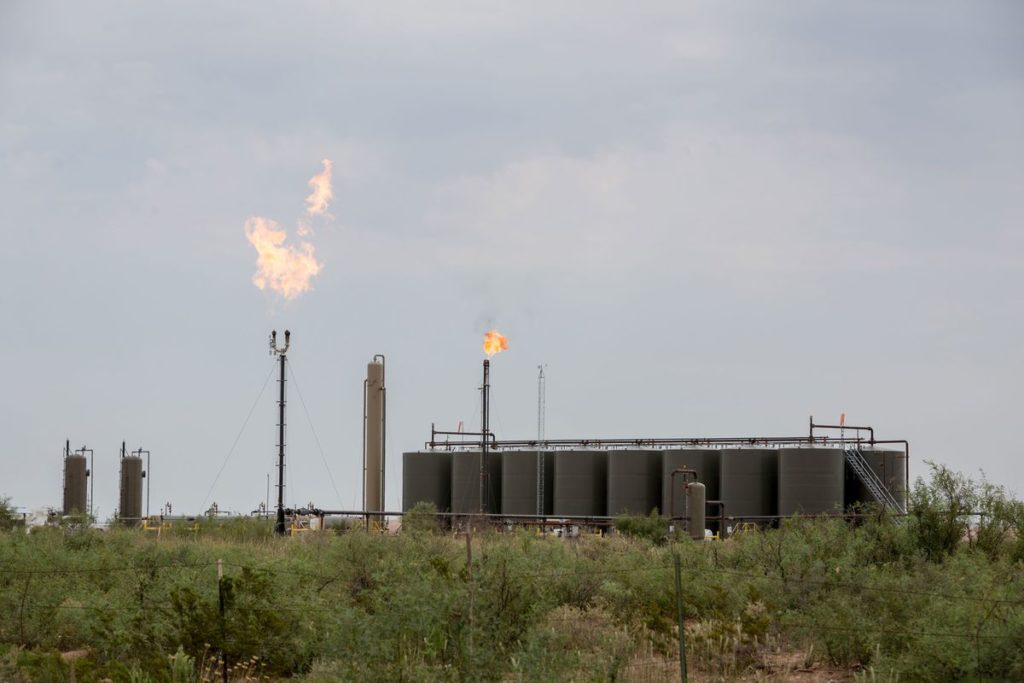 Diana Cerny has an oil boom to thank for the packed tables at her restaurant in Carlsbad, New Mexico.

Gushing shale production has brought boot-clad workers from all over the world to this Permian Basin city less than an hour north of the Texas border. White F-150s filled the parking lot of the Pecos River Cafe on a recent morning after a light rain lifted the smell of concrete cooked by days of triple-digit heat.

Like a broad swath of West Texas, this sage-covered corner of New Mexico sits atop America's fastest-growing oil field. On the Texas side, oil and gas producers can drill and fracture with relatively few bureaucratic hurdles. In New Mexico, 90% of Permian production takes place on lands owned by federal or state government, meaning companies need additional approvals from either the US Bureau of Land Management or the state’s Land Office and Oil Conservation Division.

That sets up a classic test in a state that turned politically blue this year. New Mexico has to decide how far it’s willing to go with a proposed rule to limit methane emissions, a key part of the new Democratic governor’s efforts to fight climate change. She must balance concern for the environment with the possibility that stricter regulation could tap the brakes on accelerating production that, thanks to royalties and taxes, funds nearly half the state budget. Already, some drillers expect slower growth in Permian output.

Cerny knows where she stands. Drilling “is good for the economy, it’s good for Carlsbad.” She said she worries that tighter rules could send companies packing across the border to Texas.

It’s a topic getting special attention on this hot August morning. A 10-minute drive from the cafe, outside a sand-colored event center, a line is forming for a public meeting to discuss the proposed rule.

“We don’t want all these workers to leave,” said Rosemary Madsen, 64, a bartender at the Stevens Inn off US Route 285, Carlsbad’s main drag. She’s standing in line with Kerri Crawford, a waitress there, who’s holding a bright green sign that reads: “We won’t let you plug our HOLES!!”

Governor Michelle Lujan Grisham, a former congresswoman who took office this year, is spearheading one of the country’s most aggressive plans to combat climate change: a move to 100% carbon-free power generation in 25 years. Now she's targeting methane, the main component of natural gas and a greenhouse gas that’s far more potent than carbon dioxide.

Lujan Grisham’s push comes as the Trump administration readies a plan to end direct federal regulation of methane leaks, even as some energy companies insist they don’t want the relief.

The governor is balancing her concern over the catastrophic effects of climate change with the state’s extraordinary dependence on oil and gas. Soaring Permian production was in large part responsible for the state’s budget surplus last year. Output from the shale play, the world’s biggest, is projected to hit a record in September. At the current rate, the basin will soon catch up with Iraq, OPEC’s largest producer after Saudi Arabia.

“It’s a juxtaposition for sure,” Lujan Grisham said while sipping coffee on a microsuede couch in the state’s capitol in Santa Fe. “I think the trap for too many elected individuals around the country is that they’re asked by some constituent group to pick one, and I’ve said New Mexico is going to pick every single opportunity and then be responsible at the same time.”

Lujan Grisham and other state officials are adamant that they’re not trying to stifle the industry.

“It’s not about a ban on fracking, a moratorium on drilling, a stopping of oil and gas production at all,” Jim Kenney, secretary of New Mexico’s Environment Department, told the Carlsbad meeting.