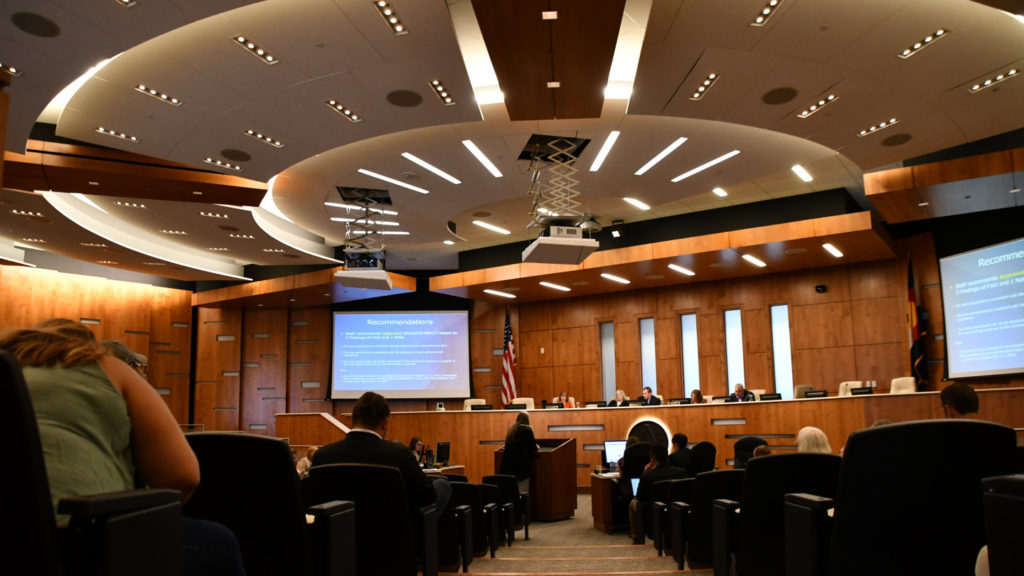 Credit: Amanda K. Clark/Special to The Colorado Sun.
The Adams County Commission during a lengthy public hearing about strengthened oil and gas regulations on 3 September.

Other measures passed by the five-person board include enhanced safety measures at well sites, the use of quieter and cleaner electric drilling equipment, and the identification of three alternative sites for each proposed oil and gas development that the county will consider with public health and safety in mind.

The Adams County decision came after more than 5 hours of public comment, including statements from residents, members of the oil and gas industry, and environmental advocates.

“We take pride in being able to find common-sense solutions and to proceed reasonably, and I think that’s what we are doing today,” Adams County Commissioner Steve O’Dorisio said. “We are establishing significant improvements to protecting health, safety, and welfare while also showing flexibility in areas where we saw a need for greater scrutiny and more work to be done.”

But advocates for the oil and gas industry called the Adams County rules a de facto ban on drilling and said they push the limits of “necessary and reasonable” regulation described in Senate Bill 181, which this year rewrote Colorado rules for energy development.

“Senate Bill 181 granted local jurisdictions authority to regulate natural gas and oil development to an extent that is necessary and reasonable. Regrettably, many of the regulations of the code as adopted by Adams County today extend far beyond those which are necessary or reasonable,” Lynn Granger, executive director of the Colorado Petroleum Council, said in a written statement that, among other things, raised concerns about the county’s air-quality monitoring requirements. “As drafted, a number of the provisions leave more questions than answers, which, in turn, provides a great deal of uncertainty for operators in the county.”

The commissioners also established a working group to address worker safety, which was brought up during public comment, and approved the addition of another full-time oil and gas inspector, which county officials say will ensure that every well gets inspected throughout the year.