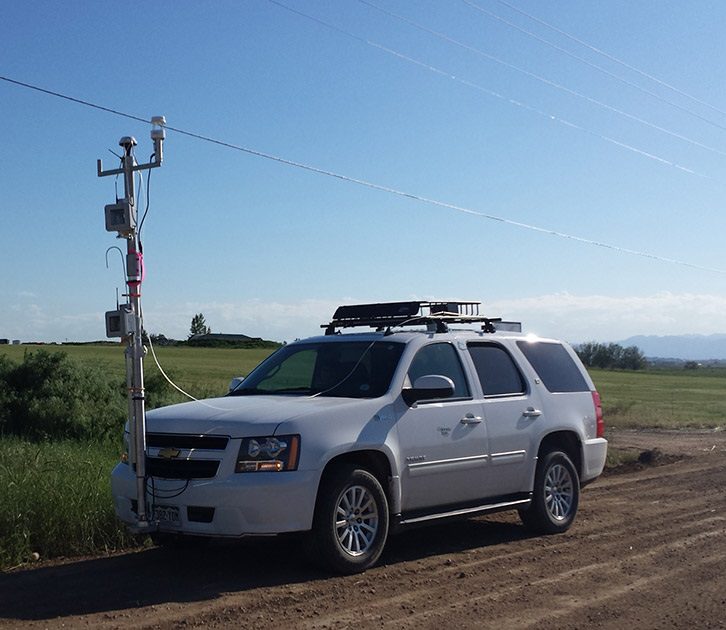 As days turn to nights in Broomfield, Colorado, residents may spot a white Chevrolet Tahoe with a pole jutting from its top slowly moving through neighborhoods and down city streets.

The SUV is jam-packed with sensitive equipment tracking what people are breathing in Broomfield, which sits atop a major oil and gas production zone. It’s a crucial component of a collaborative, multiyear study examining the relationship between oil and gas development and local air quality.

Mobile plume tracking, led by Colorado State University (CSU) air pollution experts, is a key technology in Broomfield’s ongoing Air Quality Testing Program. And it’s just one aspect of a three-year, $1.7 million contract awarded by Broomfield last year to the laboratory of CSU atmospheric scientist Jeff Collett, as a subcontractor to environmental data company Ajax Analytics. Together, CSU and Ajax Analytics are painting a comprehensive picture of Broomfield’s air and how it is being affected as new oil and gas wells are drilled, completed, and moved into production.

It’s 11 p.m. on a Thursday night in July, and CSU atmospheric scientist Arsineh Hecobian is maneuvering the plume-tracking Tahoe through a Broomfield neighborhood. She glances periodically at a dashboard-mounted screen with real-time readouts of methane and acetylene concentrations in the air. Methane is the primary component of natural gas.

Several hundred feet away, workers for the Denver-based energy company Extraction Oil and Gas are performing hydraulic fracturing on the fenced-off Interchange pad, which contains 12 oil and gas wells. The faint smell of musty basement occasionally wafts by. Hecobian watches the methane parts-per-million readout creep from 1.8 to 2—still within typical background methane concentration limits for Colorado. Eyes on the screen, she puts the Tahoe in reverse, trying to locate the invisible plume. Once she’s inside the plume, she’ll collect a sample with an evacuated stainless-steel canister to be taken back to the laboratory for analysis of up to 48 volatile organic compounds (VOCs).

“Enhanced methane concentrations are an indicator of emissions from an active oil and gas site, but other methane sources also exist in the region,” Hecobian said. “The source type is confirmed by other VOCs measured in the canister.”

While the scientists do operate the plume tracker during daylight hours, too, methane plume tracking is usually best done at night because streets are quieter and air movement is minimized. Cooler night air at the surface traps emitted pollutants closer to the ground in what atmospheric scientists call an inversion layer. Whatever is lingering in the air is more likely to stagnate inside the inversion layer. Such conditions can unveil maximum possible concentrations of air toxics, such as benzene, from oil and gas operations.

Over the next 2 years, scientists such as Hecobian from Collett’s CSU lab will perform this methane-chasing ritual during times well fracturing, flowback—the step where fracturing fluids return from the well—or drilling are taking place. In addition to tracking real-time plumes and taking periodic canister readings, they are also collecting weekly samples of ambient air.