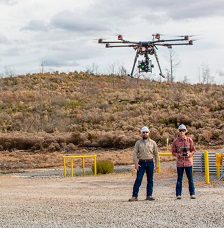 BP announced that it will deploy continuous measurement of methane emissions in its future BP-operated oil and gas processing projects as part of its ambitious program to detect, measure, and reduce methane emissions.

Continuous measurement, including instruments such as gas cloud imaging (GCI), will be rolled out to all new major projects worldwide. The technology has also been tested and installed in existing facilities such as BP’s giant natural-gas Khazzan field in Oman.

It is a key part of BP’s wider and longer-term strategy to deploy a suite of complementary methane-detecting techniques across new and existing facilities. The data generated will help BP identify the largest opportunities to tackle methane emissions, drive efficiency, and develop best practice—and is ultimately aimed at delivering and improving on BP’s methane intensity target of 0.2% from its ipstream operations.

The deployment of this technology represents a major step change in the oil and gas industry’s approach to detecting, quantifying, and reducing methane emissions. Historically, engineering calculations and emission factors have played an important part in quantifying emissions.

Gordon Birrell, BP’s chief operating officer for production, transformation and carbon, said, “This program represents an industry first and reflects our commitment to be a leader in advancing the energy transition by maximizing the benefits of natural gas.

“For gas to play its fullest role in the energy transition, we have to keep it in the pipe. This new technology will help us do that by detecting methane emissions in real time. The faster and more accurately we can identify and measure leaks, the better we can respond and, informed by the data collected, work to prevent them.”

In addition to continuous methane measurement, BP is also aiming to make use of a network of complementary technology, including a new generation of drones, hand-held devices, and multispectral flare combustion cameras—drawing upon scientific breakthroughs made in diverse fields, spanning healthcare, space exploration, and defense.

Morag Watson, BP’s vice president of digital innovation, said, “Many of today’s technological breakthroughs were only aspirations until recently. Three years ago, we sat in a room and brainstormed what we would need to achieve continuous measurement, because, at the time, the technology portfolio needed was not yet fully developed. Now we have the technology and solutions to get after this challenge. Technologies like GCI enable us to have continuous measurement. Coupled with complementary intermittent tools like drones equipped with lasers and methane sniffing technology, we are now creating a step change in how we operate our new major projects so that inspections that used to take 7 days will now be able to take 30 minutes. That time saving will allow us to continue to innovate and deliver better results.”

In time, the data collected will feed information into an extensive digital cloud network as part of a global integrated approach to reduce both methane and carbon emissions.

BP is also a founding member of the Oil and Gas Climate Initiative, which brings together 13 of the world’s largest energy companies and has set up a $1 billion investment fund to address methane emissions and invest in complementary technology, including carbon capture, use, and storage.

BP supports the Methane Guiding Principles, which were developed by a coalition of industry, institutions, academics, and nongovernmental organizations, to reduce methane emissions across the gas value chain.

BP participates in a number of World Bank flaring-reduction initiatives, including the Global Gas Flaring Reduction Partnership, which works to increase the use of natural gas associated with oil production by helping to remove technical and regulatory barriers to flaring reduction.

It is also a member of the Zero Routine Flaring by 2030 initiative, which brings together stakeholders to work together to eliminate routine flaring from operated oil assets by 2030. BP reports progress to the World Bank each year.