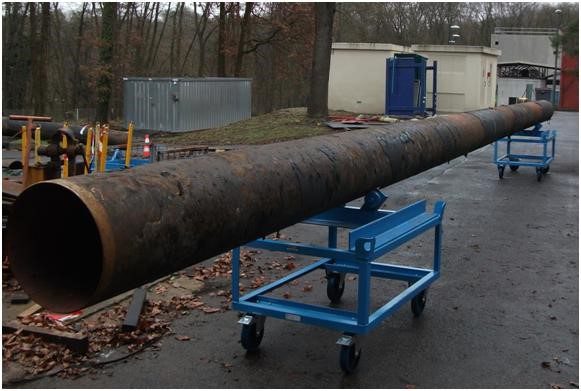 The 30-m-long pipe used for the testing campaign was typical of those used for gas transportation.

One of prerequisites of any detection system is to get preliminary data from the risk analysis to estimate the safety, socioeconomic, and environmental effects of a loss of containment. This prerequisite can lead to a strategy for early detection of containment loss and to a particular method or technology for detection.

Under this aspect, a leak-detection system allows setting up a means of risk management. The earlier the leak is detected, the faster the pipeline operator can deploy countermeasures of the emergency plan.

Fiber optics are considered one of the more promising direct leak-detection technologies. The fiber core normally used for telecommunication can be converted as a sensor using the principle of light backscattering within the fiber. Distributed temperature or acoustic profiles can be obtained with the analysis in real time of the light backscattered when sending a light pulse in the fiber.

The objectives of an early gas leak detection (EGLD) project considered here were to assess the capability of fiber-optic distributed temperature sensing (DTS) and distributed acoustic sensing (DAS) to detect a small gas leak on a buried pipe.

Results from the first phase of trials, DTS results at a distance of 500 m, were presented at the 2016 Abu Dhabi International Petroleum Exhibition and Conference (paper SPE 183137). This paper presents the second phase of the trials and the detailed results of DTS and DAS at 500 m and 20 km.

The aim of this project was to consider a representative test bench for helping the industry assess the maturity of gas-leak detection methodologies.

Gas leaks were performed from the external surface of a steel pipe with an internal diameter of 390 mm and a length of 30 m. These leakages were composed of methane, hydrogen, or nitrogen and took place through different openings (1, 3, 5, and 7 mm) and at varying released pressure (between 20 and 100 bar). The pipe was instrumented with several fiber-optic cables (ranged at 500 m and after 20 km) buried in a granular soil compacted to a known level.

Four DTS interrogators and one DAS interrogator from different suppliers were tested during the EGLD project.

The EGLD project results of the overall performance of the DTS/DAS tests to detect a small gas leak on a buried pipe will lead to guidelines to optimize parameters related to the detection performances such as. These parameters include fiber-optic position, deployment architecture along the pipe (directly buried at several widths or into a polyethylene tube), and detection range assessment.