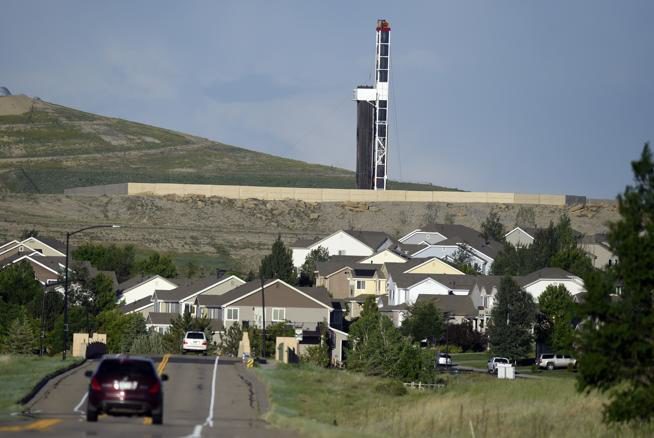 Credit: Jeremy Papasso/Daily Camera.
A hydraulic fracturing site is pictured in 2017 near a residential area in Erie. Colorado.

Colorado officials declared they will toughen their oversight of oil and gas drilling and hydraulic fracturing sites following the release of a multiyear scientific study that found industry operations may expose residents to unhealthy levels of benzene and other chemicals.

While benzene has been linked to cancer, state officials said the study, based on measuring of emissions and computer modeling, did not find a basis for predicting long-term health harm.

“Before this,” the Colorado Oil and Gas Conservation Commission (COGCC) was not involved in testing air pollution near homes, agency director Jeff Robbins said. “We’re going to do that now. We will use COGCC money.”

After the study’s release, Colorado Petroleum Council director Lynn Granger issued a statement saying protecting the health and safety of workers, communities where companies operate and the environment are top priorities for the industry. Granger claimed the study was “all based on modeling.”

“As an industry, we rely on data, facts, and science and look forward to working with CDPHE and the COGCC on actual air monitoring in the future, which is what should be used when developing policy and regulations,” Granger said.

Colorado Oil and Gas Association president Dan Haley said at a news conference that companies are concerned the study will lead to delays in permitting new operations.

“There are no long-term health impacts related to oil and gas development,” Haley said. “Policy needs to be based on real data, not modeling.”