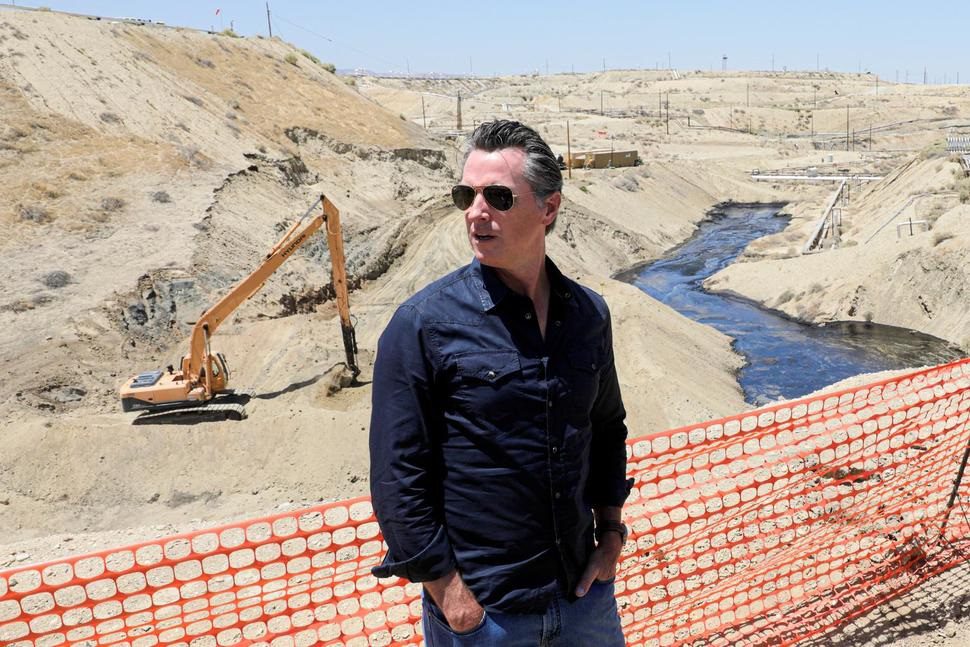 Credit: Irfan Khan/Los Angeles Times via AP.
In this 24 July 2019 photo, Gov. Gavin Newsom tours the Chevron oil field west of Bakersfield where a spill of more than 800,000 gallons flowed into a dry creek bed in McKittrick, California. Newsom's administration has temporarily banned new oil wells in California if they use an extraction method that is linked to an ongoing oil spill in Kern County. On 19 November, the Division of Oil, Gas, and Geothermal Resources announced it will not approve new oil wells that use high-pressure steam to soften the thick crude underground so it can flow more easily.

California Gov. Gavin Newsom cracked down on oil producers on 19 November, halting approval of hundreds of hydraulic fracturing permits until independent scientists can review them and temporarily banning another drilling method that regulators believe is linked to one of the largest spills in state history.

The state Division of Oil, Gas, and Geothermal Resources announced it will not approve new wells that use high-pressure steam to extract oil from underground. It is the type of process Chevron uses at an oil field in the Central Valley that leaked more than 1.3 million gallons of oil and water this summer.

Newsom, a Democrat, called the crackdown necessary to strengthen the state’s oversight of oil and gas extraction “as we phase out our dependence on fossil fuels and focus on clean energy sources.”

“This transition cannot happen overnight; it must advance in a deliberate way to protect people, our environment, and our economy,” Newsom said.