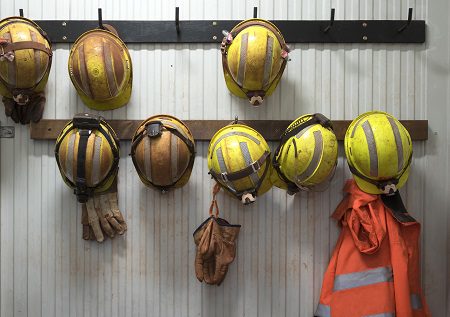 This year marks the 100th anniversary of the invention of the hard hat, one of the most recognizable pieces of safety equipment in the world. Hard hats were first worn by construction workers beginning in the 1920s. Over the years, hard hats have come to symbolize the strength of the construction industry and its workers.

Hard hats are designed to protect workers from head injuries from falling objects or overhead hazards by reducing the intensity and distributing the pressure of impacts to the head. The E.D. Bullard Company in San Francisco, California, was the first manufacturer to develop and sell hard hats that were used by some miners and laborers. At the time, Bullard referred to their product as the “Hard Boiled” hat. In the early 1930s, electricians in Boston, Massachusetts, also began wearing hard hats. By the mid-1930s, construction of the Golden Gate Bridge began, and all workers were expected to wear hard hats.

During the ensuing 40 years, hard hats of various shapes and materials reached the market. These included hard hats made of steel, aluminum, canvas and resin, Bakelite, and fiberglass. In each case, these hats were advertised as light, resilient, and cool while protecting the worker. In the 1960s, hard hats made of plastics such as polyethylene were sold. In the 1970s, when OSHA and NIOSH were created under the OSH Act, the use of hard hats was regulated as part of the head protection standard and hard hat use significantly expanded. As demand increased, more manufacturers produced hard hats, including MSA, Honeywell, 3M, and Kask.

The hard hat has a rich history, but its design has remained fairly consistent over the decades, including a suspension system and outer shell. In recent years, safety helmets, similar to those worn in mountain climbing or ice hockey, have begun to be used on some construction sites to improve worker protections beyond that provided by the traditional hard hat. NIOSH is studying the performance and design of hard hats and safety helmets to improve overall personal protection with the hope of potentially reducing the likelihood of traumatic brain injury caused by falls and to save lives. NIOSH researchers are also working to improve consensus standards that address hard hat performance.