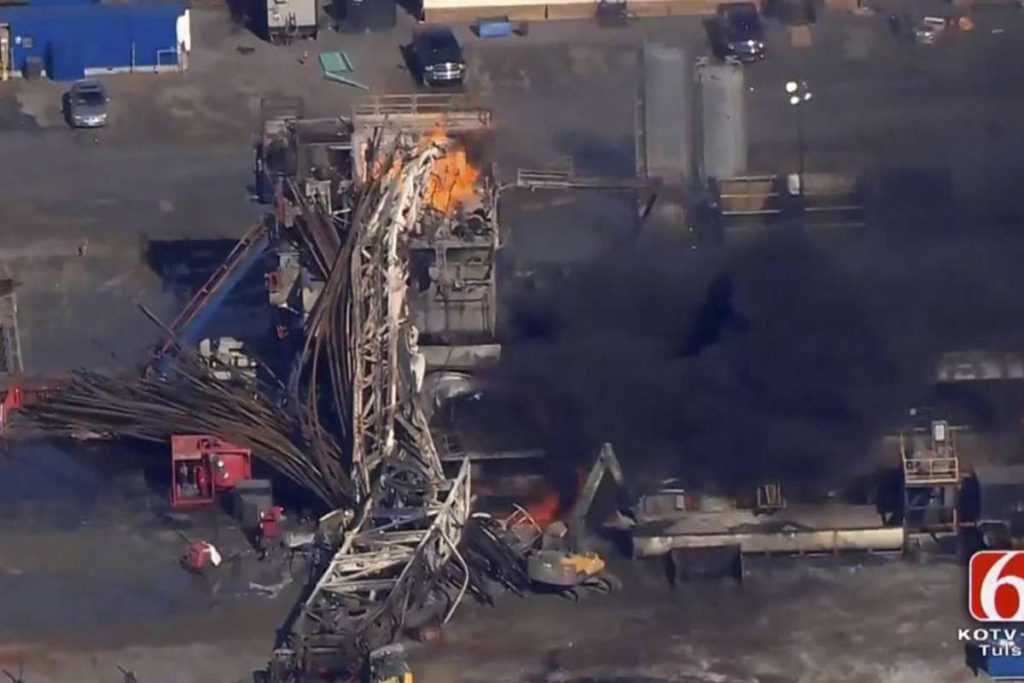 Credit: Christina Goodvoice, MBR/Associated Press.
In this photo provided from a frame grab from Tulsa's KOTV/NewsOn6.com, fires burn at an eastern Oklahoma drilling rig near Quinton, Okla., on 22 January 2018. The accident involving a Houston drilling company was the industry’s deadliest since the Deepwater Horizon tragedy 10 years ago, but the regulatory response to the Oklahoma explosion has been far less urgent.

Two years ago, an oil well near a small Oklahoma town exploded into a fireball that swept through a drilling rig, killing five in an accident deemed a needless catastrophe by federal investigators and casting a short-lived spotlight on a lack of regulation and oversight across the oil and gas industry.

The accident involving a Houston drilling company was the industry’s deadliest since the Deepwater Horizon tragedy 10 years ago, but the response to the Oklahoma explosion has been far less urgent. While the Gulf of Mexico explosion, which killed 11, spurred a drilling moratorium and a wave of new regulations, the Oklahoma disaster entered the national headlines for a brief spell and was quickly forgotten—even after the US Chemical Safety and Hazard Investigation Board found widespread failures and a woeful lack lack of safety standards and rules in the onshore drilling sector.

What has happened since then? Not much.

“Onshore is sort of a black hole,” said Lauren Grim, a supervisory investigator at the Chemical Safety Board. “There’s not really a whole lot of rules and regulations for safety on the state and federal levels, and that’s what we’re trying to correct.”

The safety board’s report was scathing. It found that the companies planned poorly and cut corners, resulting in myriad contributing factors to the five deaths, including a failed blowout preventer, a muted alarm system, lapses in well monitoring, inadequate employee training, and not enough emergency exits in the driller’s cabin, called the doghouse, where the workers were trapped.

The Chemical Safety Board also found that state and federal safety laws governing drilling are inadequate, as are the standards adopted by the American Petroleum Institute (API), the industry’s trade group. Federal and state regulators and API are beginning to consider the safety board’s recommendations, which range from better well control rules to tougher equipment standards to improved employee training, but bureaucracy moves slowly, said Grim. More substantial changes could still be a couple years away or so.

“These recommendations do take a lot of time,” Grim said. “It’s really hard to say how it will turn out until we see all the responses and the end results.”