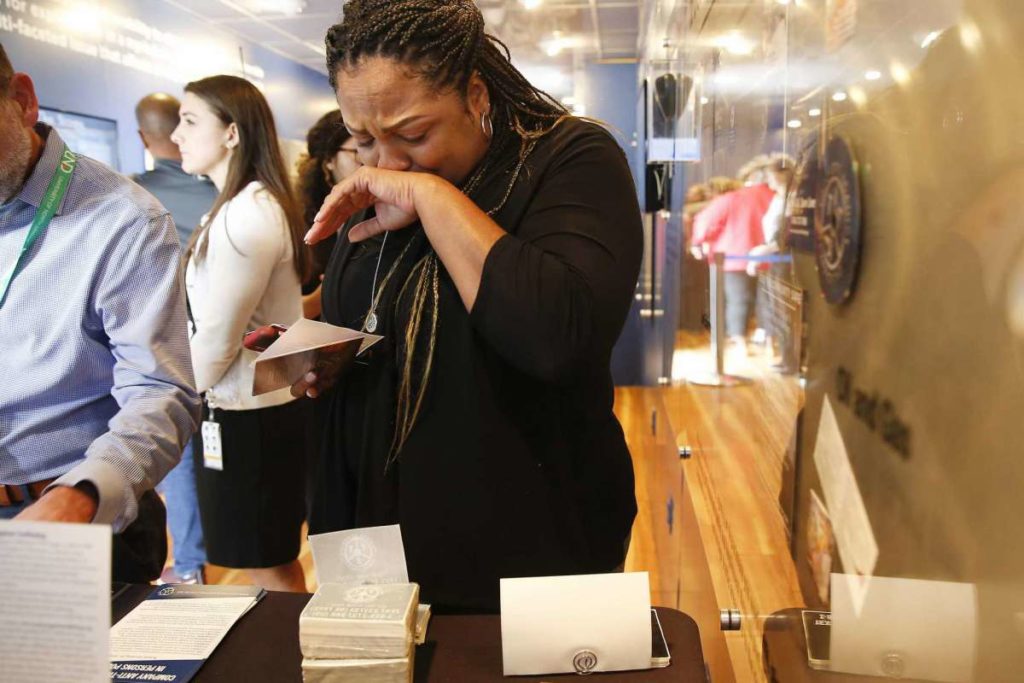 Credit: Elizabeth Conley/Houston Chronicle.
Ataria Malveaux, 43, gets emotional as she makes her way through the Freedom Drivers Project mobile museum outside of Shell Houston headquarters in Houston. “I feel like this is my story; that was me at 17” Malveaux said. “I’m so blessed to make it out.” The exhibit was on display to raise awareness about human trafficking in the energy sector—from the oil patch to gas stations and truck stops.

Ataria Malveaux was 18, just out of high school, when she fled a chaotic family life in Houston for the promise of making quick money in Dallas. She soon discovered her would-be employer was a pimp; only the help of another woman allowed her to escape forced prostitution.

Last week, memories of that harrowing experience came flooding back to Malveaux, now 43 and an operations analyst at Royal Dutch Shell in Houston, as she toured a mobile exhibit highlighting the risks and dangers of human trafficking in the oil and gas industry. She broke down in tears.

“It was very emotional because it happened to me,” Malveaux said. “A lot of young girls out there don’t have the awareness. They don’t have the support.”

The mobile exhibit is part of the increased effort by the energy industry to combat a criminal activity that has plagued it behind the scenes for decades—from West Texas oil fields to Houston energy conferences to gasoline stations and truck stops. Human trafficking, a euphemism for modern-day slavery of forced labor and prostitution, has long targeted the oil and gas industry and its male-dominated workforce.

Over the past week, the exhibit, which included testimonials and detailed information about how trafficking works and how to spot warning signs, stopped at more than a dozen major oil and gas companies to train workers to recognize human trafficking and report it to authorities. The energy industry, organizers said, is uniquely positioned to take on the issue, not only because of its vulnerabilities but also because of its global reach.