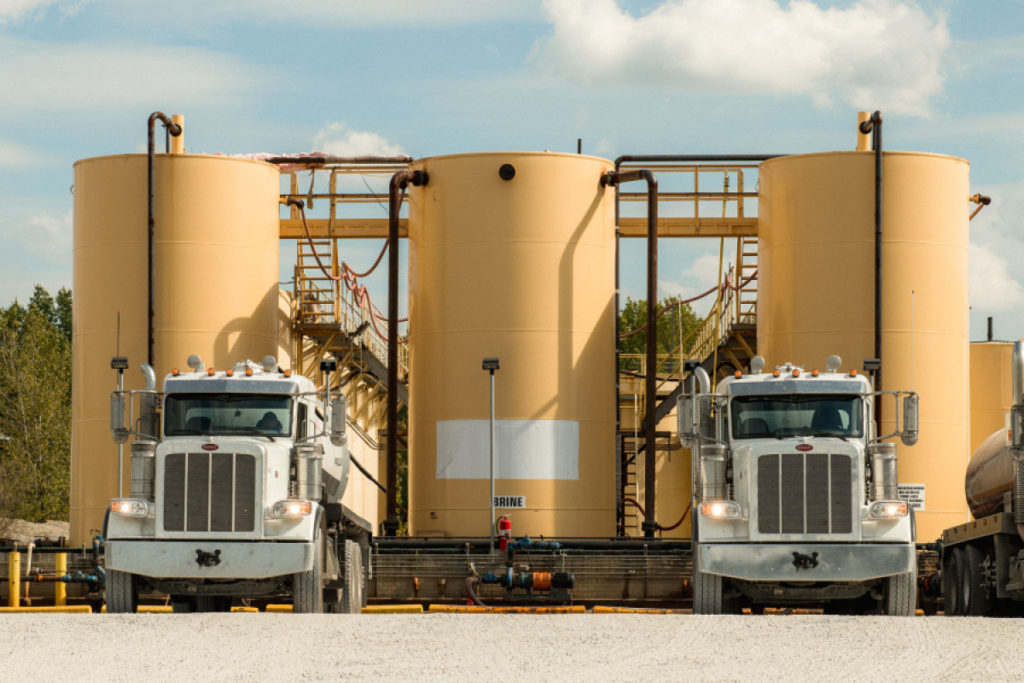 Credit: George Etheredge for Rolling Stone.
Brine trucks sit at the site of an injection well in Cambridge, Ohio.

In 2014, a muscular, middle-aged Ohio man named Peter took a job trucking waste for the oil and gas industry.  The hours were long—he was out the door by 3 a.m. every morning and not home until well after dark—but the steady $16-an-hour pay was appealing, says Peter, who asked to use a pseudonym. “This is a poverty area,” he said of his home in the state’s rural southeast corner. “Throw a little money at us and, by God, we’ll jump and take it.”

In a squat rig fitted with a 5,000-gallon tank, Peter crisscrosses the expanse of farms and woods near the Ohio/West Virginia/Pennsylvania border, the heart of a region that produces close to one-third of America’s natural gas. He hauls a salty substance called brine, a naturally occurring waste product that gushes out of America’s oil and gas wells to the tune of nearly 1 trillion gallons a year, enough to flood Manhattan almost shin-high every single day. At most wells, far more brine is produced than oil or gas, as much as 10 times more. It collects in tanks, and, like an oil and gas garbage man, Peter picks it up and hauls it off to treatment plants or injection wells, where it’s disposed of by being shot back into the earth.

One day in 2017, Peter pulled up to an injection well in Cambridge, Ohio. A worker walked around his truck with a hand-held radiation detector, he says, and told him he was carrying one of the “hottest loads” he’d ever seen. It was the first time Peter had heard any mention of the brine being radioactive.

The Earth’s crust is, in fact, peppered with radioactive elements that concentrate deep underground in oil-and-gas-bearing layers. This radioactivity is often pulled to the surface when oil and gas is extracted—carried largely in the brine.

In the popular imagination, radioactivity conjures images of nuclear meltdowns, but radiation is emitted from many common natural substances, usually presenting a fairly minor risk. Many industry representatives like to say the radioactivity in brine is so insignificant as to be on par with what would be found in a banana or a granite countertop, so when Peter demanded his supervisor tell him what he was being exposed to, his concerns were brushed off; the liquid in his truck was no more radioactive than “any room of your home,” he was told. But Peter wasn’t so sure.

“A lot of guys are coming up with cancer, or sores and skin lesions that take months to heal,” he said. Peter experiences regular headaches and nausea, numbness in his fingertips and face, and “joint pain like fire.”

He says he wasn’t given any safety instructions on radioactivity, and, while he is required to wear steel-toe boots, safety glasses, a hard hat, and clothes with a flash-resistant coating, he isn’t required to wear a respirator or a dosimeter to measure his radioactivity exposure—and the rest of the uniform hardly offers protection from brine. “It’s all over your hands, and inside your boots, and on the cuticles of your toes, and any cuts you have—you’re soaked,” he said.

So Peter started quietly taking samples of the brine he hauled, filling up old antifreeze containers or soda bottles. Eventually, he packed a shed in his backyard with more than 40 samples. He worried about further contamination but says, for him, “the damage is already done.” He wanted answers. “I cover my ass,” he says. “Ten or 15 years down the road, if I get sick, I want to be able to prove this.”

Through a grassroots network of Ohio activists, Peter was able to transfer 11 samples of brine to the Center for Environmental Research and Education at Duquesne University, which had them tested in a laboratory at the University of Pittsburgh. The results were striking.

Radium, typically the most abundant radionuclide in brine, is often measured in picocuries per liter of substance and is so dangerous it’s subject to tight restrictions even at hazardous-waste sites. The most common isotopes are radium-226 and radium-228, and the Nuclear Regulatory Commission requires industrial discharges to remain below 60 for each. Four of Peter’s samples registered combined radium levels above 3,500, and one was more than 8,500.

“It’s ridiculous that these drivers are not being told what’s in their trucks,” said John Stolz, Duquesne’s environmental center director. “And this stuff is on every corner—it is in neighborhoods. Truckers don’t know they’re being exposed to radioactive waste, nor are they being provided with protective clothing."