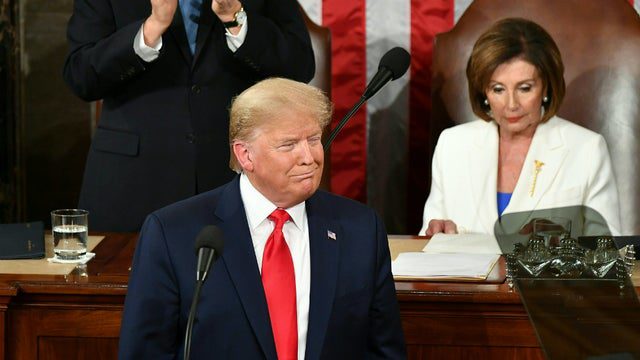 President Trump’s limited references to the environment in his State of the Union address included a plan to combat climate change with trees and a claim that his “bold regulatory reduction campaign” had boosted the oil and gas industry.

Trump’s speech was delivered to a crowd of Democrats donning climate-themed pins, with the transition of blue to red stripes representing not the parties but the increase in global temperatures.

Trump’s reference to his regulatory rollbacks includes at least 95 environmental rules that have been rolled back or are in the process of being rolled back, according to reporting from The New York Times.

“The United States has become the No. 1 producer of oil and natural gas in the world, by far. With the tremendous progress we have made over the past 3 years, America is now energy independent, and energy jobs, like so many elements of our country, are at a record high. We are doing numbers that no one would have thought possible just 3 years ago. Likewise, we are restoring our nation's manufacturing might, even though predictions were that this could never be done,” Trump said.

While many of Trump’s new regulations have been beneficial to the oil and gas industry, America has been the world’s largest natural gas producer since 2009. While US oil production reached a high in 2018, oil production has been dramatically rising since 2011 because of the shale boom.

As for job growth in their areas, manufacturing job gains went from more than 260,000 at the end of 2018 to just 46,000 for the 12 months ending in December, according to an Associated Press review of Labor Department data.

Trump has averaged 162,000 manufacturing jobs during his first 3 years in office, compared with 111,000 on average during President Obama’s last 3 years, according to Bureau of Labor Statistics data.

“To protect the environment, days ago, I announced that the United States will join the One Trillion Trees Initiative, an ambitious effort to bring together government and the private sector to plant new trees in America and around the world,” Trump said, referencing a commitment he made at the World Economic Forum in Davos, Switzerland.