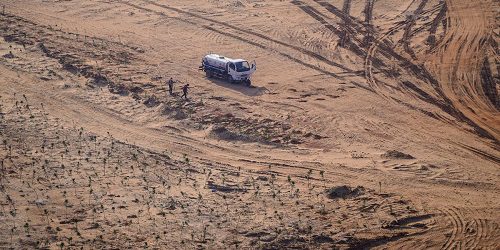 Republican lawmakers on 12 February proposed legislation setting a goal for the US to plant a trillion trees by 2050 to fight global warming, a plan intended to address climate change by sucking carbon out of the air instead of by cutting emissions.

The proposed legislation reflects an acknowledgement by some in the Republican party of rising voter demand for action on climate change, even as it seeks to preserve the economic benefits of a historic drilling boom that has made the US the world’s biggest oil and gas producer.

Republican President Donald Trump, who has repeatedly cast doubt on the science of climate change, had expressed support for the idea of a massive tree-planting campaign during a speech at the World Economic Forum in Davos, Switzerland, last month.

“Our part at home is a lot more than just planting trees. It’s utilizing the full abilities of sustainable forestry,” said congressman Bruce Westerman of Arkansas, a member of the House of Representatives’ Natural Resources Committee who introduced the tree planting bill.

The bill was one of several elements of a broader proposal on climate change introduced by a half dozen House lawmakers.