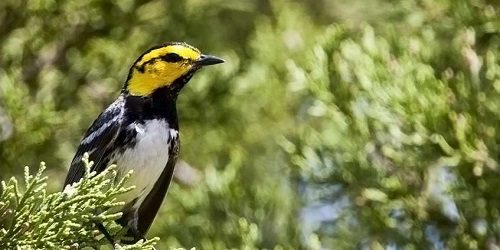 Credit: Kathy Adams Clark.
A US District Court judge struck down a request by opponents of the $2 billion project seeking a temporary restraining order to stop Kinder Morgan’s Permian Highway Pipeline from going through the Hill Country habitat of an endangered songbird known as the golden-cheeked warbler.

Opponents of a controversial natural gas pipeline through the picturesque Texas Hill Country lost a legal battle but vow to continue their fight against Houston pipeline operator Kinder Morgan.

A US district court judge in Austin on 14 February rejected a request for a temporary restraining order that would have halted the $2 billion natural gas Permian Highway Pipeline. The pipeline is being built through the habitat of the golden-cheeked warbler, an endangered songbird, and over parts of the Edwards Aquifer, a source of drinking water to millions and home to several threatened and endangered species of salamander, fish, and insects.

Judge Robert Pitman said opponents failed to show a level of harm that would require a restraining order, but he ordered Kinder Morgan not to clear vegetation within the warbler’s range during nesting season, 1 March through 31 July.

Construction has begun on the western end of the pipeline’s 430-mile route from the Permian Basin to the Katy Hub, but Kinder Morgan isn’t out of the woods in the Texas Hill Country. The request for a temporary restraining order was only part of an endangered species lawsuit filed on 5 February by the cities of Austin and San Marcos, Hays and Travis counties, the Barton Springs Edwards Aquifer Conservation District, and four landowners. The company, its subcontractors and the project also face a federal lawsuit filed by five Hill Country landowners.