With Permian Flaring on the Rise, Regulation Remains Uncertain 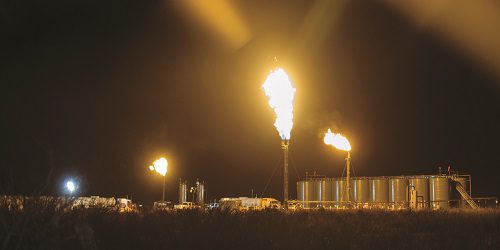 Credit: Angus Mordant/Bloomberg.
Gas flares burn at a site in the Permian Basin in New Mexico.

Flaring, or burning off associated natural gas during oil production, has roughly tripled in 2 years in the Permian. And, as flaring has skyrocketed, so have the calls to curb it. But there is little agreement on how that should be done.

"We want to reduce flaring ... the question is how we do it," Texas Railroad Commisioner Ryan Sitton recently told reporters.

Sitton, a Republican, lost his re-election campaign in the primary election. James Wright, the Republican who defeated him, has yet to outline a plan for flaring. But both Democrats still vying for their party's nomination in November's election have said they plan to make the state's flaring permitting process stricter.

Either Democrat faces long odds of victory in November, but, even if one bucks Texas voting trends, it is unclear how much one new member of the three-member commission may be able to do.

"Regardless of a Democrat or a Republican winning a Texas Railroad Commission seat, flaring regulations would not change dramatically in the short-term," said Rene Santos, an analyst with S&P Global Platts Analytics. "The long-term is more difficult to predict, but some tightening of the regulations is likely."

In the Bakken Shale, where operators continue to flare more than 500,000 Mcf/D of gas, a lower total, but higher percentage of flared gas than in the Permian, historic oil output may be being held back by flaring regulation. The state requires operators to flare no more than 12% of associated gas production, a metric operators statewide have consistently missed. That limit falls to 9% on 1 November 2020.

Lynn Helms, director of the North Dakota Department of Mineral Resources, has told S&P Global Platts previously that oil output growth will slow significantly as the state steps up its flaring enforcement efforts.

"The public sentiment around flaring is changing, and the public perception of it on a state and national level is that it has to decrease," Helms said in an interview.