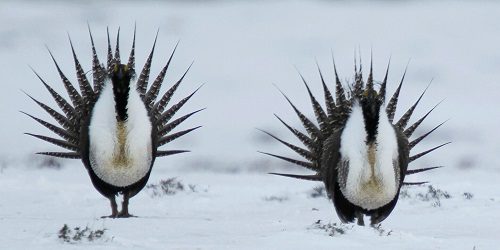 Credit: David Zalubowski/AP.
Male greater sage-grouse perform a mating ritual on a lake near Walden, Colorado, in 2013. Environmentalists challenged the Trump administration as part of a broader effort to block drilling in habitat for the sage-grouse.

A federal judge in Idaho has voided nearly 1 million acres of oil and gas leases on federal lands in the West, saying that a Trump administration policy that limited public input on those leases was “arbitrary and capricious.”

The ruling by US Chief Magistrate Judge Ronald E. Bush represented a win for environmentalists, who challenged the leasing policy as part of a broader effort to block drilling in habitat for the imperiled greater sage-grouse. The contested area spans 67 million acres across 11 Western states.

As the Trump administration has pushed to expand domestic energy production—earlier this month the Interior Department celebrated the fact that, last year, more than 1 billion bbl of oil were produced from drilling offshore and on public land—it has adopted several measures to curb public comment on regulatory decisions. While the effort has accelerated the timeline for drilling, it has also raised legal concerns.

Drew Caputo, an attorney for the environmental group Earthjustice, said in an email that administration officials "almost treat the public like an inconvenience that might slow down or get in the way of them passing out special interest favors to their friends in industry."

“That’s antidemocratic, and it shows what they really think about the public,” Caputo said. “It’s also illegal, which is one of the reasons they keep losing environmental cases in court.”

The Bureau of Land Management (BLM) issued an instruction memorandum in January 2018 aimed at speeding up leasing by streamlining environmental reviews and reducing the amount of time the public could comment on, and later protest, arrangements to drill.

“Faster and easier lease sales, at the expense of public participation, is not enough,” wrote the judge, who reinstated previous requirements that call for a 30-day public comment and administrative protest period.

Bush noted that the memo setting the new terms for leasing was issued without soliciting public comment and was “more edict in nature” than advisory.

BLM spokesman Derrick Henry said in an email that the directive at issue was part of the agency’s effort to make “common-sense adjustments” to how minerals are extracted from federal land.

“In particular, we remain committed to a simpler, more effective leasing process,” Henry said. “To do this, we have been working within our legal authorities to alleviate or eliminate unnecessary and burdensome regulations, while at the same time upholding public health and environmental protections, including sage-grouse conservation.”

Officials said they were reviewing the ruling before making a decision on whether to appeal.