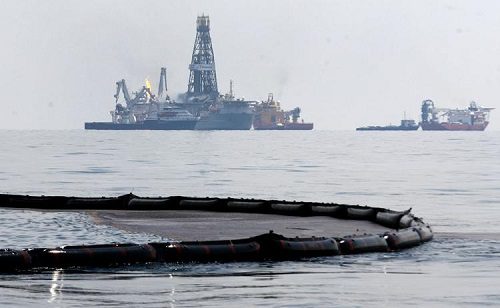 Credit: Michael DeMocker/ The Times-Picayune.
A skimmer takes oil from the surface while, behind it, the Discoverer Enterprise burns off natural gas while siphoning oil at the site of the Deepwater Horizon disaster on 18 May 2010.

While President Donald Trump's administration was working to relax offshore drilling regulations, there was a spike in offshore accidents and a decrease in safety inspections, according to an analysis by the Center for American Progress, a liberal think tank.

The Bureau of Safety and Environmental Enforcement (BSEE)— the federal agency tasked with regulating offshore drilling—has not yet released a tally of offshore incident statistics for 2019. But the Center for American Progress dug through the agency's budget documents to find the number of reported injuries per hour worked on oil and gas facilities on the federal Outer Continental Shelf.

The center found that the rate of injuries increased by 21% in 2018 and 2019 compared with the previous 2-year period of 2016–17. The data include injuries that require medical treatment beyond first aid. They exclude injuries stemming from natural causes or illness or that are self-inflicted, according to the budget documents.

"At worst, this is an unraveling of safety gains made after Deepwater Horizon," the catastrophic BP spill of 2010, said Matt Lee-Ashley, a senior fellow at American Progress.

Last month, the Wall Street Journal reported that BSEE Director Scott Angelle—a former Louisiana state official and 2015 gubernatorial candidate—asked his staff to make changes to the Well Control Rule, a new protocol imposed after the 2010 disaster aimed at reducing the likelihood of a recurrence.

Angelle's changes were meant to cut down on the cost of compliance for the energy industry, and he made them despite advice from BSEE engineers that the changes were unsafe.

The rate of offshore injuries was trending downward between 2015 and 2017. But there was a sharp uptick in accidents in 2018. The injury rate is calculated based on the number of injuries per 200,000 hours worked by operators and contractors during production, construction, and drilling operations on the Outer Continental Shelf, including in the Gulf of Mexico.

While there were fewer accidents in 2019 than in 2018, the incidents in 2019 may have been more serious. In February, BSEE reported there was one fatality in 2018. While the agency has not released the number of fatalities in 2019, media reports indicate there were at least nine offshore oil worker deaths, according to an analysis by The Times-Picayune | The Advocate. That would mean at least 8% of the injuries reported in 2019 were fatalities.