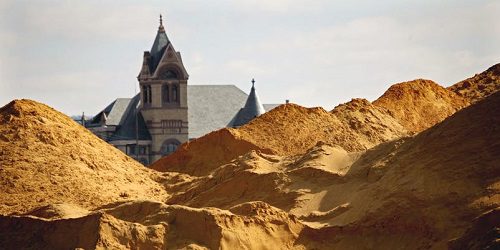 Credit: Brian Peterson/Star Tribune.
A 50,000-ton pile of sand is seen in downtown Winona, Minnesota, in 2012.

In a long-awaited decision with the potential to shape the sand mine industry statewide, the Minnesota Supreme Court on 11 March let stand a Winona County ban on industrial silica sand mining.

The ruling comes after a 4-year legal battle between Winona County commissioners and Minnesota Sands, a local company that claimed the 2016 ban was an unconstitutional limitation on interstate commerce and amounted to the government taking its property without compensation.

The seven-member court affirmed rulings by the state appeals court and district court that said Winona's ban was legal. Two justices dissented in full, and a third dissented on part of the ruling.

"We prevailed," said Winona County Commissioner Marie Kovecsi, one of three board members to approve the ban. She said that she first ran for office partly because of the sand mining issue.

"They were blasting one or two times a day, three or four times a week. A significant number of homes were being disturbed. My neighbor's window was broken after one of the blasts. It was disturbing to say the least," Kovecsi said.

"I'm just hoping that it ends here," she added.

Mike Zipko, a company spokesman, issued a statement saying Minnesota Sands would review the court's ruling before deciding what to do next.

"We continue to believe this is an unfounded ban and violates the commerce clause of the US Constitution," the statement said. "The ban is the wrong way for Winona County to try to address an issue that is far beyond their authority as a county government. We have never opposed reasonable regulations on land use, but this ordinance clearly goes too far."