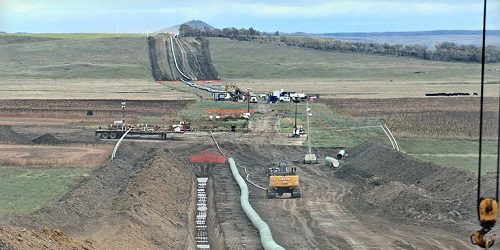 A federal judge on 25 March ordered the US Army Corps of Engineers to conduct a full environmental review of the Dakota Access pipeline, nearly 3 years after it began carrying oil despite protests by people who gathered in North Dakota for more than a year.

US District Judge James Boasberg wrote that the easement approval for the pipeline remains “highly controversial” under federal environmental law and a more extensive review is necessary than the environmental assessment that was done.

Standing Rock Chairman Mike Faith called it a “significant legal win” and said it’s humbling that the protests continue to “inspire national conversations” about the environment.

“Perhaps, in the wake of this court ruling, the federal government will begin to catch on, too, starting by actually listening to us when we voice our concerns,” Faith said in a statement.

Officials with the Corps and Energy Transfer, which owns the pipeline, did not immediately respond to phone messages left by The Associated Press. Craig Stevens, spokesman for the GAIN Coalition, a group that supports large infrastructure projects, said the decision could jeopardize the nation’s economic and energy security.

“This is a stunning decision that flies in the face of decades of widely accepted practice,” Stevens said in a statement. “The Dakota Access Pipeline is already the most studied, regulated, and litigated pipeline in the history of our country and has been safely operating for nearly 3 years.”

It’s not clear whether the ruling will shut down the pipeline. Boasberg ordered both parties to submit briefs on whether the pipeline should continue operating during the period of the new environmental review.

The pipeline was the subject of months of protests, sometimes violent, during its construction in late 2016 and early 2017 near the Standing Rock Sioux Reservation that straddles the North Dakota/South Dakota border. The Standing Rock tribe continued to press litigation against the pipeline even after it began carrying oil from North Dakota across several states to a shipping point in Illinois in June 2017.