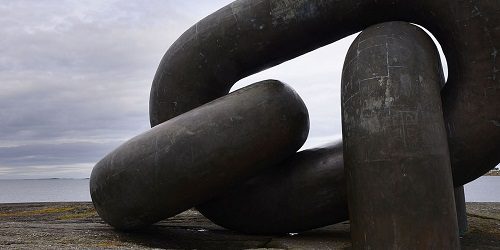 The Broken Chain monument pays tribute to those who lost their lives in the Alexander L. Kielland accident.

The loss of the Alexander L. Kielland platform on 27 March 1980 marked a turning point on the Norwegian continental shelf, said Anne Myhrvold, director general of the Petroleum Safety Authority Norway. She said she believes it has been crucial for offshore safety work.

“This was a turning point not only for the industry but also for the whole country,” Myhrvold said. “We’ve worked differently on safety since 1980—on regulatory roles, development of the regulations, and not least clarifying the responsibility of the companies. They’re the ones responsible for safety—every single day.

“Although much safety work had also been done before the Kielland, this disaster revealed weaknesses with emergency preparedness, training, the division of responsibility, regulation, and government follow-up. Important and lasting changes and improvements were, therefore, made to the regime in the following years.”

She said the long-term consequences were very considerable. “Large parts of the safety regime were reviewed and reshaped. Changes to the regulations and the division of responsibility form the basis for today’s system and the high level of safety we now enjoy.”

The specific lessons from the disaster have long since been followed up, Myhrvold said. “But Kielland still has great value and illustrates the huge consequences a major accident can have—for individuals and families, for the industry, and for society. It shows what can go wrong when safety and emergency preparedness are inadequate.”

She emphasized the importance of the long-term systematic efforts being devoted to prevention and improvement. “We see that much good work is being done to improve safety, but we, nevertheless, still witness serious incidents,” she said. “Some of these have been very critical, and it would not have taken much to turn them into a major accident. That means we can’t be satisfied. We must work better throughout. The companies must constantly make systematic efforts to avoid things going wrong.”

Myhrvold said that companies must think about what has to be in place, what risk is associated with their actions, and what barriers must be in place to avoid things developing in the wrong direction.

Read the full story and read more about the Alexander L. Kielland here.