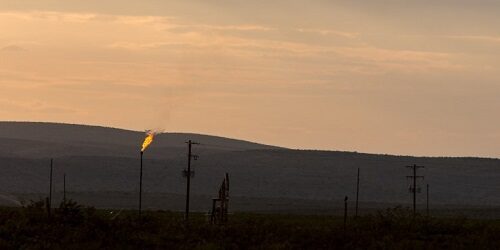 Enough gas to supply 7 million homes is leaking into the atmosphere above oil fields in Texas and New Mexico, the largest plume of climate change-driving methane pollution ever recorded over a U.S. oil field, a new study from Harvard University and Environmental Defense Fund shows.

The methane over the Permian Basin emitted by oil companies’ gas venting and flaring is double previous estimates and represents a leakage rate about 60% higher than the national average from oil and gas fields, according to the research, which was published in the journal Science Advances.

“Our study found that the quantity of methane emitted in the Permian Basin are the highest ever measured from any US oil and gas basin. This is a really big deal from a climate standpoint,” the study’s lead authors, Harvard atmospheric scientist Yuzhong Zhang and EDF scientist Ritesh Gautam, said via email.

Methane is the primary component of natural gas. It also is a powerful driver of climate change and is 34 times more potent than carbon dioxide at warming the atmosphere over the span of a century. Eliminating methane pollution is essential to preventing the globe from warming more than 2°C, the primary target of the Paris climate accord, scientists say.

The Trump administration has taken steps to roll back the Obama administration efforts to cut methane pollution and leaks from oil and gas wells, particularly with the Bureau of Land Management’s 2016 Waste Prevention Rule and the Environmental Protection Agency’s oil and gas emissions standards.

$250 Million Worth of Methane

“We need to be reducing methane emissions, not allowing them to grow,” Howarth said. “When these sort of emission rates are considered, methane makes the greenhouse gas footprint of natural gas far worse than even that of coal.”

Levels of methane in the atmosphere have been steadily rising since 2004 and spiked in 2019, according to National Oceanic and Atmospheric Administration data released on 5 April.

All told, Zhang and Gautam found that up to 2.7 teragrams of methane are leaking into the atmosphere in the basin.

The researchers used satellite data gathered in 2018 and 2019 to measure and model methane escaping from gas fields in the Permian Basin, which stretches across public and private land in west Texas and southeastern New Mexico.

“These emissions are a major climate problem as well as a huge waste of resources,” Zhang and Gautam said. “This research shows the tremendous potential for satellites to measure greenhouse gas emissions.”

The leaking and flaring of methane had a market value of $250 million as of Wednesday afternoon, said Jon Coifman, communications director at the Environmental Defense Fund.