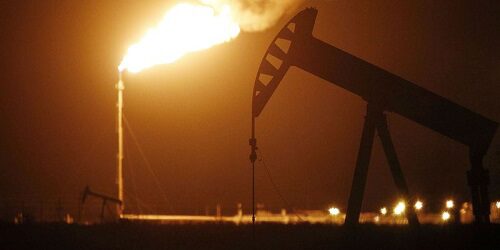 Credit: Luke Sharrett/Bloomberg.
The silhouette of an electric oil pump jack is seen near a flare in the oil fields surrounding Midland, Texas.

The call to action from the head of the Texas Railroad Commission, which oversees oil and gas production in the state, marks a stark tone shift for an agency that’s been criticized for its laissez-faire attitude toward one of the industry’s most harmful environmental practices.

After hearing on 16 June from environmental groups, industry organizations, and shale producers on ways the state’s flaring problem should be addressed, Wayne Christian, the commission’s chairman, said he directed staff to consider whether measures could be implemented this fall.

“I am very concerned by the rate of flaring in Texas,” Christian said during the webcast meeting. “We cannot continue to waste this much natural gas and allow the practice of flaring to tarnish the reputation of our state’s thriving energy sector to the general public and investors on Wall Street.”

Investors’ growing reluctance to put money into polluting industries adds insult to injury for a shale patch that has fallen from grace on Wall Street after years burning through borrowed cash without giving shareholders the returns they sought. Many explorers were already struggling to stay afloat even before the COVID-19 pandemic pushed the oil market into its worst-ever crash.

Christian said he’s been told that Wall Street is less willing to invest in oil and gas companies because of the volumes of natural gas that they’re flaring. He said he wants Wall Street and “the market” to understand that the industry is working toward addressing the problem.