Gas Companies Are Abandoning Their Wells, Leaving Them To Leak Methane Forever 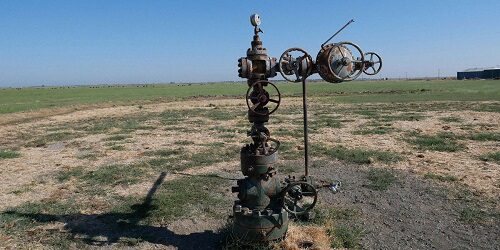 The drill chewed through the dirt at a rate of 80½ ft per hour, reaching 846 ft below ground that first day. By Thanksgiving, it had gotten a mile down, finally stopping 49 days later, having laid 2.2 miles of steel pipe and cement on its way to the “pay zone,” an underground field containing millions of dollars’ worth of natural gas.

It was ready to start pumping two months later, in early January. While 1985 started out as a good year for gas, by its close, more than half the nation’s oil and gas wells had shut down. How much money the Amerada Hess Corp., which bankrolled the dig, managed to pump out of gas well No. 095-20708 before that bust isn’t known. By 1990, the company, now called simply Hess Corp., gave up and sold it. Over the next decade or so, four more companies would seek the riches promised at the bottom of the well, seemingly with little success. In 2001 a state inspector visited the site. “Looks like it’s dying,” he wrote.

Gas wells never really die, though. Over the years, the miles of steel piping and cement corrode, creating pathways for noxious gases to reach the surface. The most worrisome of these is methane, the main component of natural gas. If carbon dioxide is a bullet, methane is a bomb. Odorless and invisible, it captures 86 times more heat than CO2 over 2 decades and at least 25 times more over a century. Drilling has released this potent greenhouse gas, once sequestered in the deep pockets and grooves of the Earth, into the atmosphere, where it’s wreaking more havoc than humans can keep up with.

Well No. 095-20708 is also known as A.H.C. Church No. 11, referring both to Hess and to Bernard Church, who, like so many in California’s Sacramento River Delta, sold his farmland but retained the mineral rights in the hope that they’d make his family rich. The Church well is a relic, but it’s not rare. It’s one of more than 3.2 million deserted oil and gas wells in the US and one of an estimated 29 million globally, according to Reuters. There’s no regulatory requirement to monitor methane emissions from inactive wells, and, until recently, scientists didn’t even consider wells in their estimates of greenhouse-gas emissions. With the pandemic depressing demand for fossil fuels and renewable energy development booming, why should owners idle or plug their wells when they can simply walk away?

In the past 5 years, 207 oil and gas businesses have failed. As natural gas prices crater, the fiscal burden on states forced to plug wells could skyrocket; according to Rystad Energy, an industry analytics company, 190 more companies could file for bankruptcy by the end of 2022. Many oil and gas companies are idling their wells by capping them in the hope prices will rise again. But capping lasts only about 2 decades, and it does nothing to prevent tens of thousands of low-producing wells from becoming orphaned, meaning “there is no associated person or company with any financial connection to and responsibility for the well,” according to California’s Geologic Energy Management Division.

“It’s cheaper to idle them than to clean them up,” said Joshua Macey, an assistant professor of law at the University of Chicago, who’s spent years studying fossil fuel bankruptcies. “Once prices increase, they could be profitable to operate again. It gives them a strong reason to not do cleanup now. It’s not orphaned yet, although for all intents and purposes it is.”