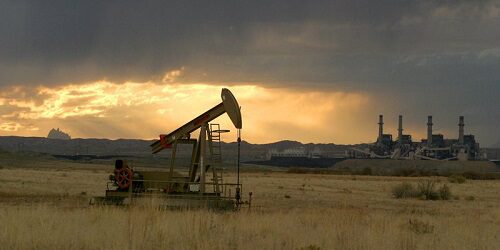 Credit: Dave Watson/The Daily Times via AP.
In this file photo from 8 November 2004, the sun sets behind Shiprock Mountain, a pumpjack, and the San Juan Generating Station near Farmington, New Mexico.

New Mexico’s state treasurer is calling on state environmental regulators to close loopholes in proposed rules aimed at reducing emissions of methane and other pollutants from the oil and natural gas industry.

State Treasurer Tim Eichenberg confirmed that he has joined with a long list of socially responsible investment groups that are citing gaps in proposed regulations from the Environment Department and the state Energy, Minerals, and Natural Resources Department. They outlined their position in a letter sent to Democratic Gov. Michelle Lujan Grisham.

Lujan Grisham’s administration has said New Mexico stands to have some of the most expansive rules for addressing methane and other emissions from the oil and gas industry after many meetings with industry experts and environmentalists.

Proposed rules by the energy agency deal with waste due to venting and flaring in oilfields. The draft rules released by the environment department target oil and natural gas equipment that emit volatile organic compounds and nitrogen oxides.

The energy department’s proposal will be the focus of a public hearing in January before the state Oil Conservation Commission, while the environment department is weighing hundreds of public comments before finalizing its version.

Eichenberg and investment groups that include Christian religious orders say the environmental agency rules would exempt the vast majority of wells in New Mexico from leak detection and repair requirements, in reference to exceptions for low-production wells.

The agencies said they plan to meet with Ceres, the environmental investment network that was behind the letter, to learn more about the group’s claims and the analyses it performed.