Upstream Opportunities in North Africa Depend on Advanced Technical Knowledge 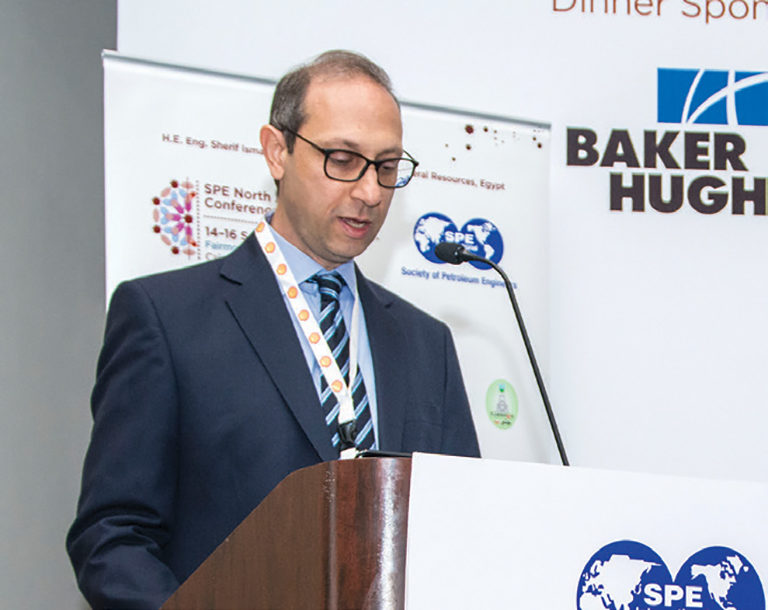 Ahmed El-Banbi, program chairman and a professor at Cairo University, says that the oil price downturn may not continue for a long time, and the industry will emerge for the better and more efficient.

The SPE North Africa Technical Conference and Exhibition held in Cairo in September highlighted the upstream sector with a focus on Egypt and the opportunities offered in the region, despite its economic hardships and geopolitical risks.

Delivering the keynote speech on behalf of the petroleum minister, ­Sherif Ismail, who was appointed as Egypt’s prime minister one week before the event, Sherif Sousa said that North Africa offers many opportunities in the upstream sector. Sousa is the first undersecretary of gas affairs at Egypt’s Petroleum and Mineral Resources Ministry.

“There are as many opportunities today as there ever were, but they are different and lie in more harsh environments requiring advanced technologies and greater investments. A clear example is the recent Zohr discovery achieved by Eni,” he said. “Zohr is the largest gas discovery ever made in Egypt and in the Mediterranean Sea.”

The region is also facing rising costs. “Exploration and production [E&P] costs in different regions are escalating dramatically, putting more pressure on upstream activities, where existing and future oil and gas opportunities cannot be explored without applying state-of-the-art-technologies,” he said.

Innovation is required for tapping the region’s vast resources. “We can also expect further innovations to reduce the escalating costs of exploration and production, unlock additional resources, and increase supplies,” Sousa said.

Ahmed El-Banbi, program chairman and a professor at Cairo University, said that the oil price downturn may not continue for a long time, and the industry will emerge for the better and more efficient. “We have done this before, and we will do it again. So, get ready for the industry when it bounces back,” he said.

“To achieve this target, we require the coordination and cooperation between various E&P companies in the country, including EGPC, EGAS [Egyptian Natural Gas], and Ganope [Ganoub El-Wadi Petroleum],” he said.

Among the proposed solutions to meet the growing local demand, Egypt is increasing E&P activities and reviewing agreements and development leases with foreign partners. “We are also developing unconventional resources, increasing the use of enhanced oil recovery [EOR] methods, as well as changing the strategic use of oil and gas to increase its value,” he said.

The widening gap between the demand and supply of petroleum products in Egypt also requires increased efficiency throughout the oil and gas sectors.

“In terms of drilling, we have progressed from drilling tens of meters to many kilometers below the surface, both vertically and horizontally. The total number of wells put on production during 2014–2015 is 388, producing 80,800 BOPD and 13,400 B/D of condensates,” El-­Bakly said.

He also referred to the discovery of the Zohr supergiant gas field. “It could become one of the world’s largest natural gas discoveries and help meet Egypt’s gas needs for decades,” he said. “It will be a game changer for Egypt and the Mediterranean in terms of energy stability and will give a boost forward for more natural gas discoveries in the area.”

Eni reported that available well and seismic data indicate that the Zohr discovery could hold a potential of 30 Tcf of lean gas (5.5 billion BOE) in place covering an area of approximately 100 km2.

The Zohr 1X NFW discovery well was drilled to a total depth of approximately 13,553 ft (4131 m) and hit 2,067 ft (630 m) of hydrocarbon column in a carbonate sequence of Miocene age with excellent reservoir characteristics (approximately 400 m of net pay). The well’s structure also has a deeper Cretaceous upside that will be targeted with a dedicated well in the future.

The plenary session highlighted the importance of small- and medium-size enterprises (SMEs) in driving the industry in the region to the next level. Panelists said that the current period offers opportunities for investment and innovations for SMEs, even though governments in the region are removing subsidies, which help SMEs to tap these opportunities.

“But governments in the MENA [Middle East and North Africa] region need to incentivize SMEs as they are the main drivers for innovation and for the economy in general,” said Abdul Jaleel Al-Khalifa, CEO of Dragon Oil. “Unlike IOCs [international oil companies] which come to the region and take concessions, SMEs focus on marginal fields with low overhead, but their contribution to job and wealth creation is huge.”

Ali Mira, president and CEO of Sahara Oil and Gas, said that SMEs play a vital role in the Egyptian oil industry as they produce more than 115,000 B/D of Egyptian oil. “Medium companies produce about 91,000 BOPD, while small enterprises produce around 24,000 BOPD,” he said.

Mira said that there are 37 SMEs working in the oil and gas industry in Egypt, with Khalda Petroleum, which is an Apache-operated joint venture with EGPC, Petrobel [Belayim Petroleum], and Gupco [Gulf of Suez Petroleum] leading the market. These companies also face the challenges of a shortage of skilled labor and lack of capital.

“SMEs are very important to the country’s economy and overcoming the challenges they face will positively help improve the national economy,” he said.

During the EOR/improved oil recovery session, panelists said that the region requires cutting-edge technological solutions to improve oil recovery factors, which are low compared with neighboring countries in the Middle East.

“Most of the easy oil has already been extracted, leaving a non-negligible quantity of oil in the reservoirs,” Helmy ­Sayyouh, a professor at Cairo University, said. “But the important question is how much oil is recoverable and what techniques could be applied.”

The oil recovery factor in Egypt stands at 34%, according to Shaheen El-Sayed, vice chairman of production for Middle East and North Africa at IPR Egypt. Algeria’s reservoirs, which require the deployment of EOR techniques, have a recovery factor of less than 20%, said Salah ­Khebri, the energy minister of Algeria.

Conventional technology has recovered approximately 50% of the original oil in place. However, ongoing research projects are set to boost this level to more than 75%, as was the case at one of the reservoirs operated by Total in the Abu Al Bukhoosh field in Abu Dhabi.

Panelists said that the development of EOR projects may take up to 10 years. “In Egypt, a number of oil fields are expected to undergo one or more of the EOR methods in the near future. However, the implementation of any of the EOR methods involves high capital expenditure. These processes are difficult and high-risk operations,” Sayyouh said.

In spite of the research programs and pilot projects in Egypt over the past decade, the industry has limited experience in large field development. “Scarcity of field experiences have prompted the current development of a knowledge-based expert system that can facilitate the reservoir engineers’ task of selecting the most appropriate EOR method,” Sayyouh said.

Egyptian reservoirs are technically good candidates for EOR techniques. “Among the techniques that can be deployed in reservoirs in Egypt is immiscible gas injection. Steam injection is feasible in some of the Gulf of Suez reservoirs, while chemical methods are feasible in most of the Western Desert reservoirs,” he said.

Wave stimulation and microbial EOR technology may also be introduced in the fields.

The identification of applicable EOR methods and determination of their suitability to candidate oil fields in Egypt must also include the assessment of technical and economic criteria.

“This problem presents a real challenge as you need experts to help sort, process, analyze, and cross-reference the acquired reservoir data, coupled with other information, to be able to achieve the most feasible selection of techniques in an efficient and profitable way,” ­Sayyouh said.

Upstream Opportunities in North Africa Depend on Advanced Technical Knowledge