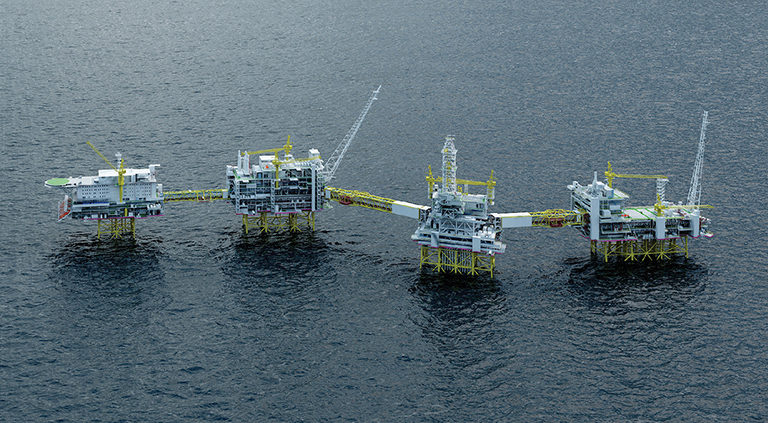 Illustration courtesy of Statoil.
The plan for the Johan Sverdrup field will employ four platforms, each with a different function, connected by walkways.

Statoil is going to work to put its enormous Johan Sverdrup discovery into production, showing that even one of the most explored parts of the North Sea still has significant potential.

The find in the heart of a cluster of fields in the Norwegian sector of the North Sea is expected to produce up to 650,000 B/D, said Øivind Reinertsen, senior vice president for Johan ­Sverdrup field development, in a briefing on the project at SPE Offshore Europe. “We are in a very, very mature area in the Norwegian Continental Shelf,” he said, adding that the find in 2010 was one of the largest there since the 1980s, with 1.7 billion bbl to 3 billion bbl of recoverable oil.

Statoil is pushing the pace of development at a time when low oil prices leave scant margin for development cost inflation. While the Norwegian national oil company is still engineering and signing contracts on the first phase of the project, it has begun work on the second phase to meet a tight 2022 deadline to start increasing the output from 315,000 B/D to more than 550,000 B/D, or one quarter of Norway’s oil output.

The discovery and the project in one of the oldest offshore plays are indications that there is still much to be learned about the rocks and what it takes to manage the cost of a megaproject.

What is now called the Sverdrup field could have carried another name. It was one of the earliest blocks licensed in the Norwegian Sea, and a well drilled in 1976 came within 200 m of hitting the reservoir rock, Reinertsen said.

Instead, that explorer found only water in the formation. No one tried again because the geology did not suggest an oil field below. The area was blocked from the apparent source of hydrocarbons by a seemingly impenetrable section of rock in between. But Statoil decided to test that interpretation, after a well drilled into that supposedly barren rock revealed some oil present.

The Sverdrup discovery showed the analysis was wrong, but Reinertsen said “we still do not have a clear answer to how oil has migrated.”

There is also a lesson to be learned about profitably developing those barrels for half of what oil was selling for when Sverdrup was found. Back then, the price of offshore development was also surging.

Reinertsen said Statoil has also been working to adopt more cost-effective methods. It has written its bid documents to offer service companies more leeway to use lower cost, industry standard methods. It has also pushed partners to seek out the best suppliers globally.

“In the industry, all the companies have asked for different, unique solutions and that increases the cost and has been inefficient for companies to deliver,” he said. They also want to build as much as possible onshore, where the cost and quality are likely to be better.

A tool Statoil will use to deliver on the promise is the massive new lift boat from Allseas, the Pioneering Spirit, to deliver three of the four topsides in a single piece and mount them on the jackets standing in 110 m-deep water. The fourth cluster is located in a place that cannot be reached by the boat.

The use of the enormous two-hulled lift vessel will allow structures to be lifted in one piece, which would otherwise require at least three lifts, Reinertsen said. Using the Pioneering Spirit will save time during the tight summer construction season. More importantly, it eliminates the need to bring out crews to connect the pipes and wires offshore, where the risk of injury and mistakes are greater than at an onshore yard where it can be tested as a whole.

There are still challenges that could run up prices. Reinertsen described the largest of the structures as the “biggest, most complex jacket on the Norwegian Continental Shelf.” The platform for Sverdrup workers will have 450 cabins and 560 beds.

“My biggest worry is the size of all of this,” he said. “The biggest challenge is ensuring that when all the parts are together they function as a system.”