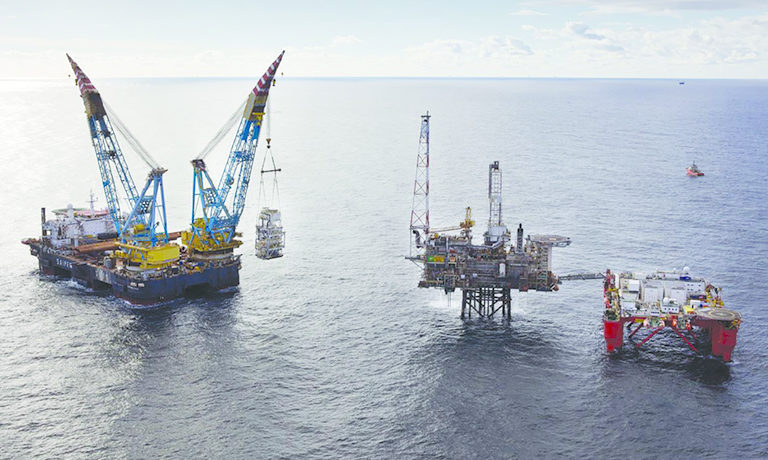 Photo courtesy of BP
A 700-ton module, left, is lifted onto BP’s Andrew platform to process production from the Kinnoull field in the North Sea. A 28-km pipeline allowed the profitable development of the project, and helped justify refurbishment of the platform, which provides a link to the Forties Pipeline System for export.

There is no shortage of ideas for reducing the cost and risk of offshore oil and gas developments. The hard part is implementing them in an industry where they require changes in long-standing habits, corporate cultures, and some new technology.

Offshore UK has become a testing ground for doing things differently because the high cost of exploration and production there is jeopardizing its future.

“We have got to get about 40% out of our cost base really, really quickly,” said John Pearson, who chairs the Oil & Gas UK’s Efficiency Task Force, which is responding to the problem that has spawned a variety of initiatives.

The task force has pointed out the need for using more standardized equipment and designs as a way to reduce the risk of cost overruns, blown deadlines, and malfunctioning systems. This will require a change in the habits of engineers working for operators that are used to specifying even small details in the equipment ordered. Pearson said the added cost often falls short of any improvement in performance.

There have been some early successes, with one company speeding offshore projects by planning them using visualization software and another improving its parts inventory management, according to the Oil & Gas UK’s 2015 Economic Report.

At SPE Offshore Europe, the speakers calling for change said results so far have been mixed. Matt Corbin, managing director of the UK subsea business for Aker Solutions, said some customers listen and change how they are doing things, while ­others “pretend to listen and go their own way.”

As the group president for Northern Europe and the CIS for Amec Foster Wheeler, Pearson knows firsthand how hard it is to convince people and companies to change, which will require building broad-based support. Based on his time with a major oil company, Pearson said that if a worker told his boss one day that he was no longer going to follow the company’s long-­established standards, “it would not go over very well.”

In a presentation at the conference, Patrick O’Brien, chief executive for the Industry Technology Facilitator, said the group is interested in simplifying well designs by reducing the number of ways that wells are constructed. Other options for reducing drilling costs include using drilling vessels to drill top holes to speed work, and using coiled tubing to do more.

“We do see some good technologies,” said O’Brien, who leads a technology development organization, adding “but operators are not taking them up.”

A repeated theme at the conference was the importance of operators identifying suppliers and service companies worthy of their trust and empowering them to figure out what is required in the field.

Pearson said offshore equipment should be more standardized. For example, firefighting pumping units could be sold by capacity, perhaps in small, medium, and large, rather than the customized designs now commonly used.

He likened it to buying a car. There are variations offered on key performance variables, such as the engine size, but there is a limit to the choices. “When I buy a car, I do not specify the properties of the ball bearings, I trust them on that,” he said.

When it comes to offshore equipment, the customers can and do specify such things. For example, oil industry customer preferences have required pump makers to create equipment with hundreds of different valve stems, Pearson said. Although these often small differences have a small impact on performance, they exert a large impact on the cost of maintaining inventories, manufacturing, and the time needed to engineer a device.

GE Oil & Gas studied the impact of oilfield contract specifications on the engineering time required for a turbine used for generating electricity. A total of 5,500 hours was required for a standard gas turbine, while the modifications specified for one used offshore in the North Sea pushed the total to more than 37,000 hours, said Tassos Vlassopoulos, chief marketing officer for offshore oil systems at GE Oil & Gas.

A typical contract contains 700 standards, according to GE. One such contract required 12 man-weeks of work to compile and review 280 documents with more than 4,000 pages. Only 105 documents were considered relevant to engineering the product and only 42 of them merited comment.

An argument offered for these bespoke designs—an adjective commonly associated with custom clothing making—is that greater specifications are required because of the risks associated with oil production. A GE paper (SPE 175509) compared these methods to more efficient systems used in other industries, such as aerospace, and said that “by mandating new qualifications, bespoke requirements, and customization, more risk is introduced into the system, not less.”

“The best validation is field ­proven experience and by forcing the supply chain to introduce new revisions and designs for individual project and qualifications, risk is introduced due to the lack of field experience,” it said.

A paper by Apache Corp. (SPE 175458) explained how to efficiently manage large projects by using methods developed when leading military troops in the heat of battle. It uses decentralized management methods in situations when plans must be adjusted and leaders need to be trained and empowered to deal with unexpected  problems.

The method requires finding partners who can and consistently meet demanding standards and solve problems as they arise. On the list of key elements for successfully managing complex projects is simply: “Trust is essential.”