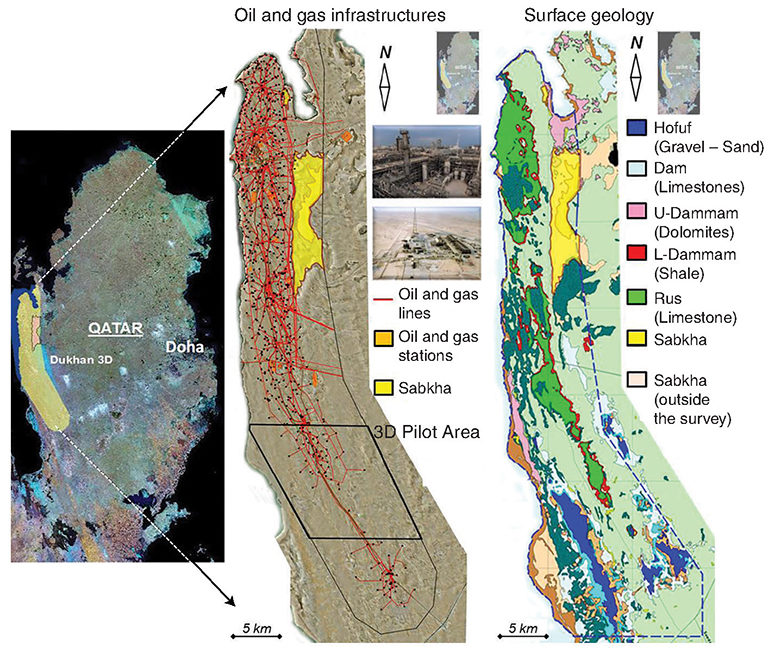 Dukhan field affords an opportunity to assess alternative near-surface velocity-modeling work flows that specifically integrate microgravity (MGR) and vertical electrical sounding (VES). A pilot study of the Dukhan seismic data demonstrates that integration of MGR/VES into prestack depth migration (PSDM) improves the fidelity of seismic images and results in an improved depth match. The resultant MGR/VES PSDM pilot model improved the velocity model between the surface and top Simsima formation on the basis of visible impact on the deeper structure obtained from imaging and better fit between the seismic depth horizons and well measured depths.

The Dukhan field (Fig. 1 -above) along the southwest coast of Qatar is an elongated anticline that has significant hydrocarbon reservoirs in the Jurassic Arab and deeper formations. In 2007, Qatar Petroleum invested in a new full-field, land and shallow-water 3D-seismic survey of the area.

Despite considerable and continuous progress in seismic technology, obtaining an accurate, quantitative, well-focused seismic depth image at reservoir level remains challenging. In land seismic, a poor characterization of the near-surface geology is detrimental to the depth imaging of underlying structures. The proper knowledge of the near surface to correct for its perturbations onto the seismic wavefield remains one of the main challenges to be addressed. The near surface influences the kinematics as well as the dynamics of the source-generated seismic waves. Knowledge of the near surface to correct for its induced distortions is critical for a reliable use of seismic images, structures, and amplitude at reservoir level. The near-surface lateral and vertical velocity variations often are not accessible with seismic methods, even to the seismic refraction survey, because their depth of investigation is limited to the top of the shallowest hard layer. In addition, rapid lateral changes and large velocity contrasts are unfavorable to seismic refraction.