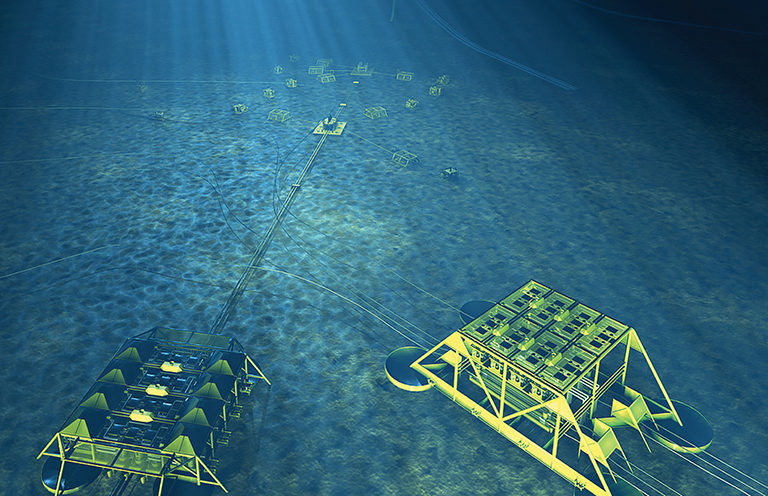 Graphic courtesy of DNV GL
Fig 1—A joint industry project led by DNV GL is investigating the use of composite components on subsea equipment such as a subsea processing unit.

As offshore projects continue to grow in size and scope, the oil and gas industry is looking for new ways to lower costs. To help in that effort, DNV GL has launched a pair of initiatives focused on the use of composite components in offshore applications.

Last September, it announced the formation of a joint industry project (JIP) to investigate affordable composite components in the subsea sector. In December, the company released a recommended practice on thermoplastic composite pipes (TCPs) that allows companies to use TCPs in place of steel or traditional flexible material in offshore operations.

The JIP aims to replace large-scale testing of composite components for subsea activities with a process it calls certification by simulation. The idea behind the process is to use the results from numerical simulations during qualification and certification. The JIP will attempt to validate advanced material models by experimentation, focusing primarily on predicting chemical aging.

In addition, Weitzenböck said the process can help save time requalifying and recertifying previously qualified components for new applications. It will also allow for a faster transfer of information between projects.

“Information and test results can more easily be reused in other projects, and the modeling approaches may also be applied in early design to select materials,” he said.

The JIP consists of seven companies in addition to DNV GL: Statoil, Petrobras, Petronas, Nexans, GE, Aker Subsea, and Airborne Oil and Gas. The Research Council of Norway is also funding two PhD scholarships at the Norweigan University of Science and Technology in Trondheim on this topic. Weitzenböck said the JIP members met twice in 2015 and work is well under way to delivering the first draft procedures by this summer.

DNV GL also plans to develop processes to accept mathematical material models in the certification process, which will be documented in a revised edition of the DNV GL offshore standard for composite components (Fig. 1 above).

The recommended practice for TCP, DNVGL-RP-F119, was developed through an 18-company JIP led by DNV GL that included polymer producers, TCP manufacturers, and operating companies. Intended to target operators, contractors, and other entities seeking acceptance to use TCP, it provides technical provisions and recommended acceptance criteria to prevent failure in response to combinations of cross-sectional forces, internal pressures, and external pressures. It accounts for case-specific issues related to use and integration when the TCP is part of a larger system and requires that a system risk assessment is performed.

Per Anker Hassel, a principal engineer of polymers, fibers, and composites at DNV GL, said TCP is a cost-effective option because it is lightweight and spoolable. This could allow operators to use smaller vessels during the installation of a pipeline or a riser and during the decommissioning phase of an offshore project.

However, companies looking to use TCP face some barriers, most of them coming from a lack of familiarity with the product and its qualification. Hassel said a barrier is that there was previously no standard to qualify TCP for offshore use. Also, despite the increased use of TCP in the last decade, the in-service experience from offshore application and installation is limited.

Hassel said traditional riser configurations might not be an optimal application for TCP risers and, because it is a more recently developed technology, companies are not used to working with it.

“As with all new technology, there is a barrier due to a lack of experience with the new technology. For example, the [TCP’s] low weight in water is a huge benefit, but it is also a challenge for deep­water riser systems with respect to dynamic behavior due to floater motions, wave, and current loading.”