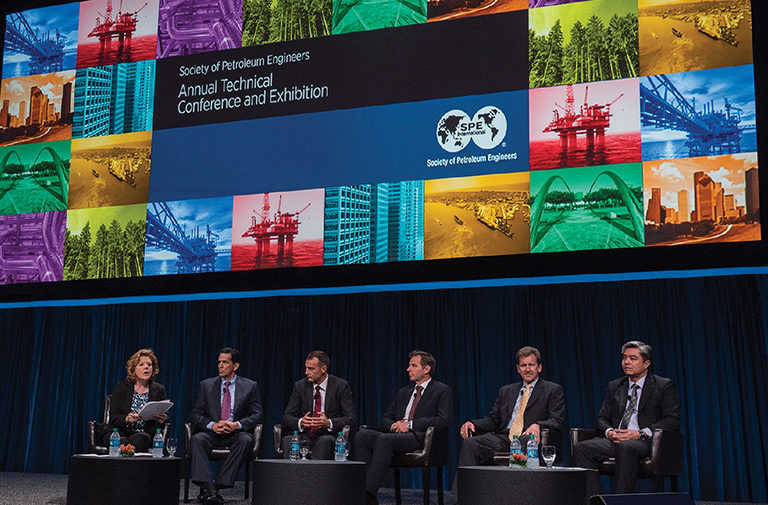 More than 13,500 oil and gas professionals gathered at SPE’s Annual Technical Conference and Exhibition (ATCE) on 28–30 September in Houston, making it the second highest-attended ATCE.

The conference, which focused on the positive potential of the future while addressing the current challenges of the oil and gas market, furthered the exchange of industry knowledge with more than 400 technical papers presented at 46 technical sessions. In addition, 450 companies filled the exhibition floor.

A look ahead on the global energy road map to 2040 prompted a lively discussion among panelists at the opening general session on the first day. No one underestimated the challenges faced by the oil industry in the current climate of low prices, project cutbacks, and layoffs. But the discussion also stressed the resilience of the industry, the continued importance of fossil fuel energy to the world economy, and reassurance that the industry will come through a difficult period and be stronger.

Bernard Looney, chief operating officer of production at BP, noted that even before the drop in oil prices, the company was increasingly aware that costs had “really gotten out of control in our industry, particularly in the last 5 years.” The oil price collapse compounded that challenge.

“Small things, they add up, all the way to very big developments like Mad Dog Stage 2 here in the Gulf of Mexico,” ­Looney said. Through re-examining the project, BP has lowered the price tag from USD 20 billion to USD 14 billion. “And, quite frankly, the question for the team today is could we do that project for less than USD 10 billion?” he said.

Looking forward, Looney cited the positive role that fossil fuel should have in lifting people from poverty around the globe. At the same time, Looney stressed the need for the world to put a price on carbon. Notwithstanding the challenges of the current economic environment, ­Looney said, “I’m convinced, and I think we’re convinced, that we’ll get through this. The industry has been here before, and we’re an incredibly adaptive industry.”

Incoming 2016 SPE President Nathan Meehan, a senior executive adviser at Baker Hughes, noted that in the 1980s, oil prices were depressed and, during those rough times, many of the technologies that enabled production from unconventional and deepwater reservoirs were developed.

Speaking at the SPE Research and Development Technical Section dinner on the eve of the conference’s opening, Meehan called upon industry professionals to respond to the oil price downturn with a renewed spirit of determination.

“You are the ones who will have to come up with the technologies that enable us to solve problems differently than we used to solve them,” he said. “You can do it in today’s price environment. You can come up with these innovations.”

The rapid improvement seen over the past 7 years was not the result of drilling contractors working in isolation, he said. Rather it was driven by collaborative research and development efforts from multiple companies and other groups that focused on innovating in areas such as directional drilling and bit technology.

To push for similar progress in other technical areas, SPE will be holding its second Research and Development Competition, which encourages researchers and engineers to solve the industry’s grand challenges.

Of all the challenges outlined, ­Meehan stressed the importance of addressing the topics of carbon dioxide (CO2) and environmental stewardship. While explaining that SPE has no intention to take political positions on the subject with regard to carbon taxes, Meehan said that it does plan to launch programs to figure out ways for the industry to minimize CO2 emissions.

The Projects, Facilities, and Construction dinner on the first evening of the conference addressed the issues of complexity and the complications it feeds. The failure rate among megaprojects across industries ranges from 35% to 65% or higher. The oil and gas industry’s exploration and production (E&P) megaprojects often top that range. What role does the complexity of a project play in sustaining the high failure rate? Is there a limit to the degree of complexity that we are capable of effectively managing?

Duhon said that complexity is a condition that does not seem to require a definition because “we know it when we see it.” However, the term “complexity” encompasses a continuum of systems and conditions. Simple and complicated complexity are linear and predictable, whereas complex and chaotic complexity are nonlinear and unpredictable.

The size of the project may not be the culprit. “Projects are not complex because they are simply large. We can deal with large projects,” Nandurdikar said. “Two-thirds of a project until cutting steel is not physical. It’s moving information. A complex information flow creates complex projects. And the number of ways you can fail increases exponentially with complexity.”

The ability to make sense of complex data and “pull it all together” to understand it is lacking. Edwards said, “We’ve lost the skill set of knowing how all the pieces fit together.” The extent of specialization within project teams is contributing to the inefficiencies caused by compartmentalization.

The panel agreed that complexity is an organizational problem more than anything else. And while there are no easy answers, rethinking at the enterprise level is necessary. Although specialization has its place in project teams, there must be an approach to understanding the interconnectivity of the efforts and to make sense of the informational flow. “It’s a paradox: The more complex your project is, the more simple your management must be,” Duhon said.

As part of the challenging market environment, many companies are looking to trim costs. “Cost cutting is necessary; however, these cost-cutting measures come at a price,” said Shauna Noonan of ConocoPhillips, who spoke at a special session on “Managing the Future Impact of Current Cost Cutting” on the second day of the conference. She is the SPE technical director for production and operations.

Noonan said she originally intended to focus on “misguided” cost cutting but concluded that the issues involved apply to all cost cutting. Specifically, the full potential consequences of cutting costs must be assessed and documented, which is seldom done, and management must be accountable for cost-cutting decisions, which is difficult without the documentation of the potential consequences.

Cost cutting is necessary in an oil economic downturn, she said. But if the wrong costs are cut, which often happens, the long-term impact may be major problems and higher costs.

While managers habitually focus on optimizing operational performance, this habit often disappears in a sharp cost-cutting environment, Noonan said. What is needed is management accountability in decision making in a cost-cutting regimen.

“Our industry does not document the full impact of the cost-cutting decisions,” Noonan said. To address this, “I expect management to be taking the initiative.”

At the same session, Nandurdikar argued that the industry downturn itself reflected a major deficiency in senior management and the current examples of harmful cost cutting are symptoms of the problem.

He said the downturn should not have been a surprise to anybody. Industry officials had discussed doubts about the sustainability of high oil prices as early as 2012. “I think, at some point, we have to acknowledge that there were warning signs coming,” he said, asking why nothing was done.

With the downturn now in force, “the responses that we’ve seen so far can only be described as uninspiring and blasé,” Nandurdikar said. “Nothing original has come up yet.” The responses have largely been reductions in capital budgets across all businesses, reductions in training and travel budgets, reorganizations, and layoffs. “My proposition is that if we want to be true leaders, we should be thinking about the long run,” he said.

About the industry employees being laid off, Nandurdikar said, “Did we want them before but not need them? Do we not need them in the future? Were these unnecessary people we hired? Or did we just resource for the peak and, now that the peak’s gone, we have deep cuts?” The layoffs, he said, “will make us weaker for the future.”

The current emphasis on sustaining cash flows is necessary, Nandurdikar said. However, it has led to constraints on projects already in execution in some cases, and can result in cost increases as high as 33%.

During a special session held on “Value Preservation: Sustainability and Management of Above-Ground Risk” on the first day of the conference, panelists discussed how holistic risk analysis and the efforts to quantify above-ground risk are evolving to improve the delivery and performance of projects.

Helge Hove Haldorsen, 2015 SPE president, said that the production of oil and gas has lifted people out of poverty and raised the standard of living globally. However, earning the public’s trust is a business imperative and health, safety, security, environment, and social responsibility is “job No. 1,” he said.

RoseAnne Franco of Verisk Maple­croft,  said that the “global landscape” for oil and gas this year is complex but must be understood to remain competitive. “This conversation likely wouldn’t have occurred 10 years ago,” she said.

She described a method introduced by Verisk Maplecroft and Wood Mackenzie that aids in the quantification of country risks. The asset risk index is derived from the assessment of risks, such as access, development, and commercialization, during the life cycle of an asset.

In the access phase, factors such as ease of entry, fiscal system, contract sanctity, and corruption are assessed. In the development phase, labor activism, civil unrest, supply chain, and local content are evaluated. The commercialization risks are availability of infrastructure, pricing, currency, Organization of the Petroleum Exporting Countries affiliations, and fiscal stability.

Franco said that all the risks must be considered holistically to aid in their mitigation.

Looking to the Future

Summing up the general positive view of the future, Scott Tinker provided a historical perspective on the global energy mix and its price cycle at the opening session of the conference. He is the director of the Advanced Energy Consortium in the Bureau of Economic Geology at the University of Texas at Austin.

In comparing the mix of energy sources from the beginning of the 1980s to today, Tinker said, “We’ve been through, in 35 years, a major industrial energy cycle. And guess what? The global energy mix never noticed. It’s remarkably boring.”

In response to a question about advice to university students and displaced industry employees, Tinker said that he has two sons in graduate school, one in petroleum engineering and the other in geoscience.

“I continue to believe that energy is the greatest industry on the planet. It underpins everything,” he said. “It’s vital for economic growth and prosperity. It’s vital to lift the world out of poverty. So I am as bullish on this industry, fossil fuels, as I have ever been. I think it’s a place for young people to make a remarkable difference in the world.”