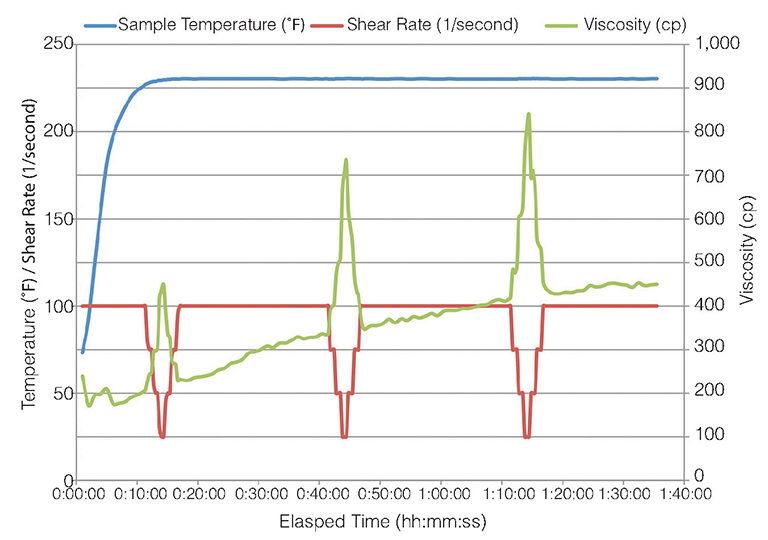 This paper reports the completion of a two-lateral well in the Williston basin where produced water (PW), filtered but otherwise untreated, was used throughout the slickwater and crosslinked components of approximately 60 hydraulic-fracturing stages. Proppant was placed successfully in all perforated zones by use of a hybrid design that used 7 million gal of water (of which 2.2 million gal was crosslinked). This paper will concentrate on the development and implementation of a metal-crosslinked fracturing fluid that showed excellent stability.

The demand for an economical approach to reuse water from oilfield operations—namely produced, flowback, and nonpotable sources—is not a new concept. In slickwater fracturing, reuse of PW is a solved problem, thanks to the ready availability of synthetic friction reducers that are efficient even in heavy and unpredictable natural brines. Here, the physical chemistry of the system (a soluble polymer reducing pipe friction) is fairly straightforward and the key innovations driving successful friction reduction in PW were easy to identify and import from polymer science once the failure mechanisms for the parent polyacrylamides in PW were understood. Although the synthetic polymers used in PW are derived from more-costly feedstocks than the parent polyacrylamide/polyacrylate copolymers, the completion-cost increase is easily balanced out in most cases by various cost issues around water sourcing.

This article, written by Special Publications Editor Adam Wilson, contains highlights of paper SPE 173783, “First 100% Reuse of Bakken Produced Water in Hybrid Treatments Using Inexpensive Polysaccharide Gelling Agents,” by Blake McMahon,SPE, Bruce MacKay, SPE, and Andrey Mirakyan, SPE, Schlumberger, prepared for the 2015 SPE International Symposium on Oilfield Chemistry, The Woodlands, Texas, USA, 13–15 April. The paper has not been peer reviewed.
...
This article is reserved for SPE members and JPT subscribers.
If you would like to continue reading,
please Sign In, JOIN SPE or Subscribe to JPT