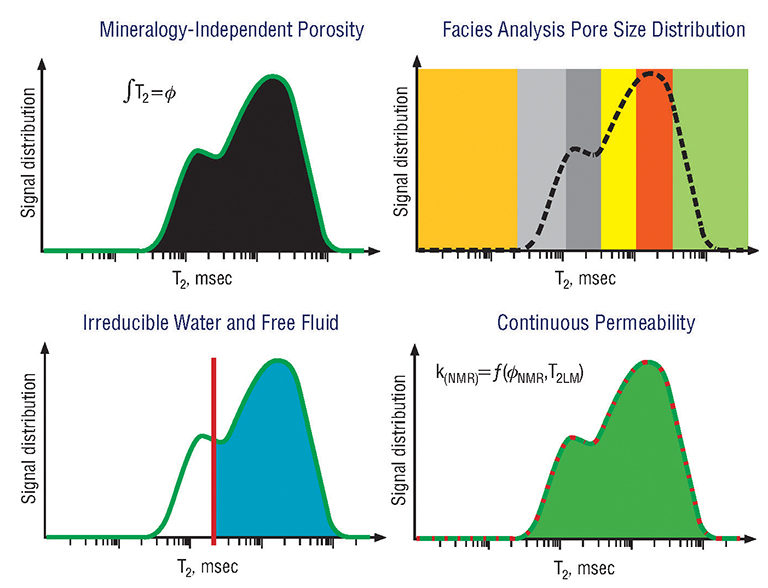 Reservoirs consisting of heterogeneous carbonates and shaly sands pose formation evaluation challenges for conventional logging-while-drilling (LWD) measurements. Widely used resistivity, density, neutron porosity, and sonic measurements are all sensitive to both the formation matrix and the fluids, which may create ambiguities in the evaluation of reservoir fluids.

The Schlumberger proVision Plus magnetic resonance-while-drilling (MRWD) technology offers enhanced evaluation capabilities. By manipulating the hydrogen atoms in the fluids, nuclear magnetic resonance (NMR) methods provide a focused measurement of fluid properties and their interactions with the surrounding matrix at a fundamental level. The technology provides a more complete, real-time assessment of producibility in complex reservoirs.

Evolution of the Technology

The industry has used NMR technology for formation evaluation for more than 25 years, during which significant technical and operational developments have greatly enhanced its capabilities and applications. In porous media, NMR techniques reveal pore and fluid properties by exciting the nuclear states of hydrogen-containing molecules in the formation fluids and measuring the relaxation times for the induced excited energy states.

The relaxation time for a molecule near a pore wall surface tends to be much faster than that for a molecule in the bulk fluid volume. A distribution of all the relaxation times, known as a T2 distribution, can be used to derive both irreducible and producible fluid volumes, and an improved estimation of permeability. These measurements are also important for identifying bypassed pay zones and estimating production rates.

The first NMR tools were deployed on wireline after the hole had been drilled, which added rig time and cost to the operation and did not allow for real-time changes to the wellbore’s trajectory. Schlumberger shifted the service from wireline to a while-drilling application in 2002. This early work focused on redesigning the sensor array to make it more robust and capable of withstanding dynamic drilling environments.

The design effort culminated with the introduction of the company’s latest MRWD system in 2012. Its new sensor makes reliable measurements under rapidly changing downhole temperatures and pressures and withstands the vibrations and drillstring shocks that are common during drilling.

Further design enhancements allow the tool to be placed anywhere within the bottomhole assembly (BHA). A sleeve stabilizer minimizes tool motion without affecting the steerability of the BHA. Powered by a downhole electrical turbine, the tool does not need to be tripped to replace batteries.

By yielding lithology-independent porosity, pore-size distribution, and continuous permeability measurements, and providing direct detection of hydrocarbons, the technology offers a number of benefits in the assessment of complex reservoirs (Fig. 1 above). Because the data are acquired as the well is drilled, petrophysicists and reservoir engineers can assess the formation fluids before they commingle with drilling fluid, which complicates evaluation.

The MRWD data complement other LWD data, enabling advanced petrophysical evaluation of complex reservoirs. For example, the system can be run with a sourceless formation evaluation-while-drilling technology, which uses pulsed neutron generator technology to yield a detailed description of the rock matrix mineralogy. Taken together, the two technologies provide sophisticated rock and fluid property evaluation without chemical sources.

The combined use of the two technologies yields a complete petrophysical picture of reservoir quality, making it possible to identify pay zones that would otherwise be passed over and accurately determine reservoir permeability in both shaly sands and heterogeneous carbonates.

The MRWD system also identifies areas of low permeability, thus helping  to improve decision making about where and how to produce. When additional pay zones are discovered, the data can be used to create a targeted completion design.

The MRWD technology enabled the measurement of lithology-independent porosity and provided the ability to distinguish between irreducible and free ­fluids, both of which were critical in identifying bypassed pay, evaluating reserves, and determining producibility.

The T2 distribution relaxation times enabled the operator to characterize two laminated sand-shale sequences in real time, resulting in a 60% increase in calculated reserves. The analysis also allowed for estimates of net-to-gross and continuous permeability, which guided the selection of perforation intervals and helped optimize the completion design (Fig. 2).

The technology also provides more detailed characterization of carbonates than is possible with the use of ­triple-combo logging alone.

An operator in South America identified a heterogeneous formation comprising limestone, dolomite, sand, silt, and clay, which was drilled with a 12¼‑in. bit. The operator ran a triple-combo logging suite to evaluate the formation, but because carbonates were mixed with shales, there was insufficient information for accurate porosity evaluation.

The MRWD system was proposed as a means of more accurately characterizing the carbonate sequences, thus increasing the likelihood that all feasible pay zones could be exploited. The operator ran the technology with a coring system that allowed the LWD data to be compared with laboratory core measurements. Petrotechnical experts provided real-time support to facilitate informed changes to the drilling operation while the tools were still in the hole.

Using the MRWD technology, the operator was able to log the interval in drilling mode, with no interference to the coring operation. The system acquired data that accurately reflected the rock properties as confirmed by core analysis, despite the large hole size and wellbore deterioration.

The data enabled additional operator insight into the reservoir, leading to the identification of a previously undiscovered sand body that was unexpected in the geological sequence. The additional pay sand was of higher quality than the original target sand body and added significantly to the productivity of the field.

The latest generation of the MRWD system has been used in more than 250 wells worldwide, with more than 250,000 m of formation logged. Further advancements have been made to the system, including a larger tool size. To complement the 6¾-in. tool for 8½-in. holes, the MRWD 8¼-in. tool was introduced this year for 12¼-in. holes.

New processing techniques are also being developed to extract greater value from the measurements provided by the technology. The techniques will help reveal the porosity and fluid signatures in the data. Ultimately, this information will extend the system’s ability to reveal previously hidden pay zones and optimize completion strategies to maximize the producibility of complex plays.